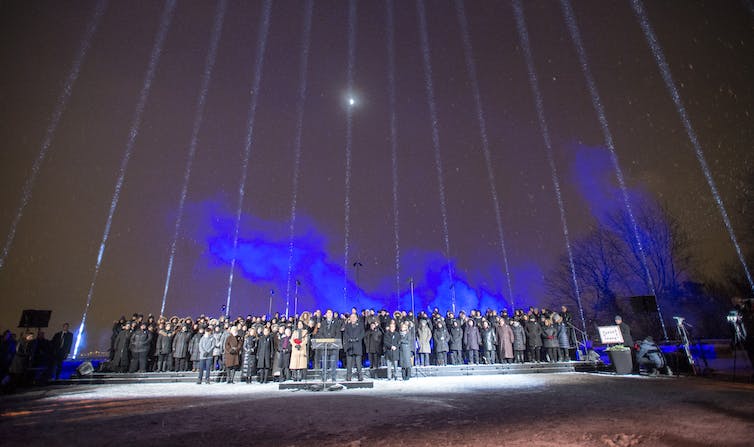 In recent years, the media has been reluctant to name mass shooters for fear of granting gunmen notoriety or encouraging copycat crimes.

This happened after the mass shooting in Nova Scotia in April 2020 that left 22 people dead. Prime Minister Justin Trudeau asked media organizations not to name the perpetrator, and many publications have used terms like the “gunman” or the “shooter,” or have taken to using his initials, G.W. 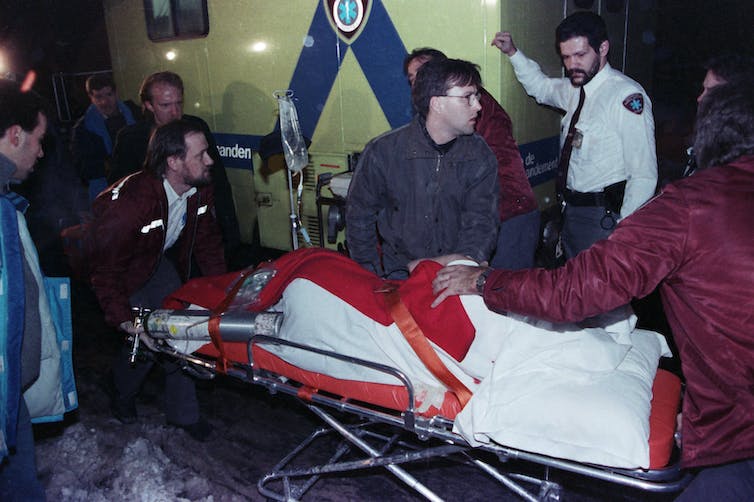 A victim is transported to an ambulance on Dec. 6, 1989, after Lépine opened fire in a packed classroom, killing 14 women before turning the gun on himself. THE CANADIAN PRESS/Tom Hansen

Some opponents of gun control, however, still name the shooter. But they often employ Lépine’s birth name: Gamil Gharbi. In doing so, these members of the firearms community seek to “other” the gunman — to distinguish him from other gun owners, and to intimate that he was not a “real” Canadian firearms owner.

Invoking his birth name raises the spectre of stereotypes associated with “foreigners,” especially Muslims — themselves the victims of a mass shooting in Québec four years ago this month.

Lépine was born in Montréal. His mother was a French-Canadian nurse; his father was an Algerian businessman. Lépine’s parents split up when he was a child, and his mother returned to work to support the family. At 14, his name was legally changed and he took on his mother’s pre-marital surname.

Groups representing firearm owners frequently seek to define gun violence as mostly a problem of criminal gangs. They argue that the licensed firearms community is responsible for few of the illicit drug-related shootings that grab headlines in Canadian newspapers.

That’s true, though those same groups are reluctant to discuss other kinds of gun violence, including domestic homicide and suicides, which often involve legal firearm owners.

The fact that the Montréal Massacre shooter had acquired a licence to purchase his rifle (then called a Firearms Acquisition Certificate) is problematic for the gun community.

The solution therefore for some Canadian firearms owners is to distinguish Lépine from other gun users by referring to him as Gamil Gharbi.

“Right-wing Canadian males seem eager to name Lépine as Gharbi, because to them this means he was a product of North African, not North American, culture … this proves the foreignness of Lépine/Gharbi’s misogyny and tells us everything we need to know about Algerians, Muslims and the rightness of the War on Terror.” 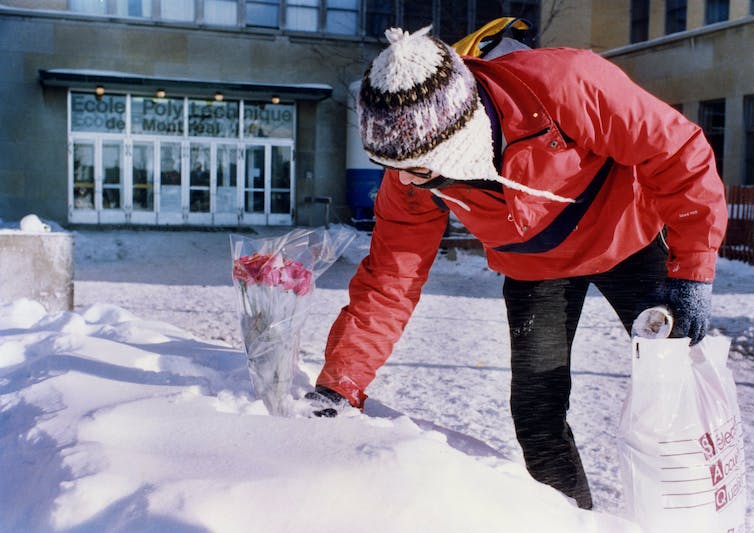 A University of Montréal student lays a bouquet of roses at the front entrance of the École Polytechnique de Montréal on Dec. 7, 1989, the day after Marc Lépine shot and killed 14 women before turning the gun on himself. THE CANADIAN PRESS/Paul Chiasson

Some gun owners have been particularly keen to refer to Lépine as Gharbi.

For example, an organization called Justice for Gun Owners wrote in 2017 that “radical feminists like to portray Gamil Gharbi as a typical Canadian male, but this is very far from the truth.” He was, rather, “the son of an Algerian wife beater.”

In 2018, the National Firearms Association published a letter in its official journal that connected several mass shootings to immigrants or people of colour.

The writer admitted that he might be “stepping onto a slippery slope,” but said he could not understand why the media still used the name Lépine when “in point of fact, his actual name is Gamil Gharbi and he was born the son of a reportedly abusive Muslim immigrant from Algeria.” He asked how the home life of Lépine differed “from the average law-abiding Canadian gun owner?”

He added in his letter:

“I am not a racist, but I have to wonder what role such obvious cultural and/or religious differences may have played in these particular mass shootings.”

“It comes as no surprise to me, nor should it come as one to you, that December 6th is dedicated to hating men when the official Montreal Massacre narrative says all men are responsible for Gamil Gharbi’s actions.”

Blaming immigrants or people of colour for gun violence is not new in Canada. Historically, Canadians have often ascribed a tendency towards violence to people of some races or ethnic origin.

In the late 19th and early 20th centuries, for example, some Canadians expressed concern about the supposed tendency of southern European immigrants to tote pistols. These concerns contributed to efforts to regulate handguns more stringently.

Today, however, invoking the birth name of the Montréal Massacre shooter is an attempt by some gun owners to avoid taking any responsibility for violence in Canada, and to instead distract by pointing fingers at immigrants and people of colour.

It’s part of an effort to say that law-abiding gun owners (or LAGOs, as some call themselves) are never the problem.

There’s just one problem with this argument. Lépine was a licensed gun owner. That troubling historical fact should not be forgotten.