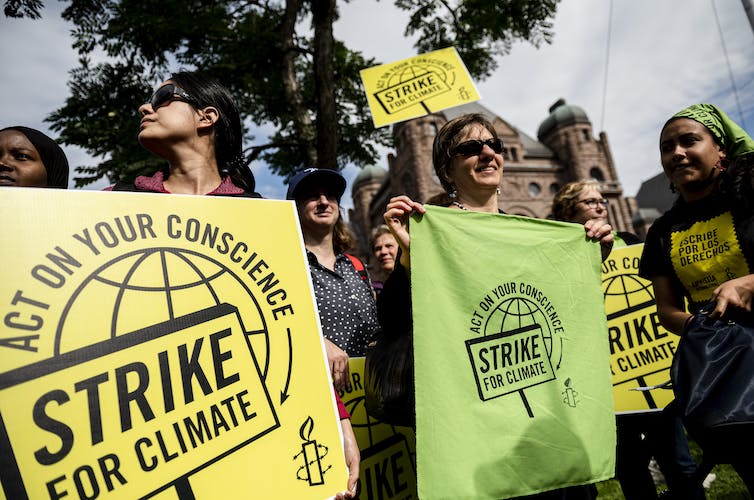 Amnesty International staff and volunteers gather at a climate change protest in Toronto in Sept. 2019. THE CANADIAN PRESS/Christopher Katsarov

Canada has one of the largest non-profit sectors in the world. It accounts for at least 6.8 per cent of gross domestic product (GDP) and employs 12 per cent of the country’s working population (third overall after retail and manufacturing).

More than most other countries, the non-profit sector in Canada relies on government funding. Yet there is a shocking lack of transparency.

There is no better evidence of this problem than the WE charity scandal, which demonstrates the need for greater transparency in government funding for the non-profit sector.

Read more: WE Charity demise shows why trust, transparency are so critical for NGOs

Researchers identified several concerning trends: inequities in federal funding among jurisdictions; vast disparities in funding among provinces and municipalities; a lack of sustainable funding for non-profits; and a funding landscape that privileges a small number of organizations.

The problem with federal funding

There has been a significant increase in federal funding to these four sectors over time. Women’s issues received $55.8 million in 2014 alone, compared to $17.3 million in 2000. Funding for the Indigenous Peoples’ sector more than doubled from $450 million to nearly $1 billion.

The problem, therefore, is not necessarily a lack of funding. It is shifting priorities. Federal funding for human rights has declined, while funding for environmental issues has increased only incrementally since 2000. 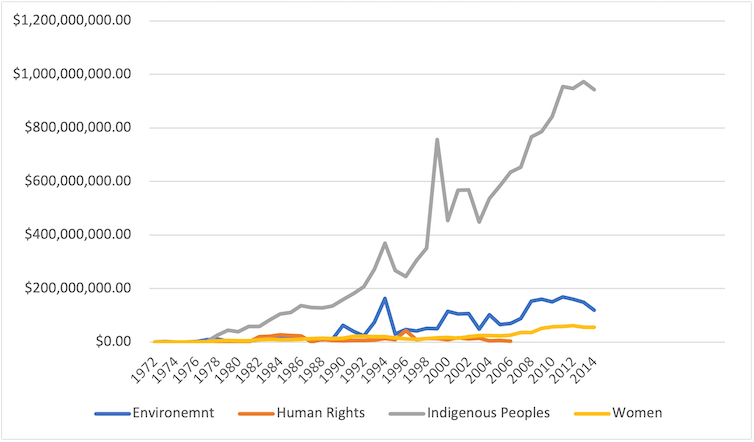 Ontario receives a vastly disproportionate amount of federal grants than the rest of the country. From 2000 to 2014, organizations in these four sectors in Ontario received $3.3 billion compared to less than $1 billion in Québec. In the women’s sector specifically, non-profits in Ontario were granted over $380 million, which was more than double the combined amount of funding for every other province and territory in that sector.

There are also notable disparities among cities. Non-profits in Winnipeg received less federal funding than Ottawa, but far more than Toronto or Vancouver (in part because of the larger number of Indigenous organizations in that city). In the women’s sector, non-profits in Toronto and Ottawa received more federal grant funding than the next fifty cities combined.

These disparities matter. The quality of essential public services, from employment training to sexual assault centres, are impacted by the availability of funding.

These services are as essential in Moncton or Regina as they are in Toronto.

Support for the non-profit sector varies in Canada based on government priorities. In B.C., funding for the women’s sector has declined while the number of grants to Indigenous organizations have increased exponentially since the early 2000s. In contrast, funding for women’s issues in Nova Scotia has been double the level of funding for environmental or Indigenous issues in most years since the 1970s.

These trends bode well for non-profits in N.S. that manage services such as transition homes. But not so much in B.C. where the provincial government severely reduced funding in this sector in the early 2000s. 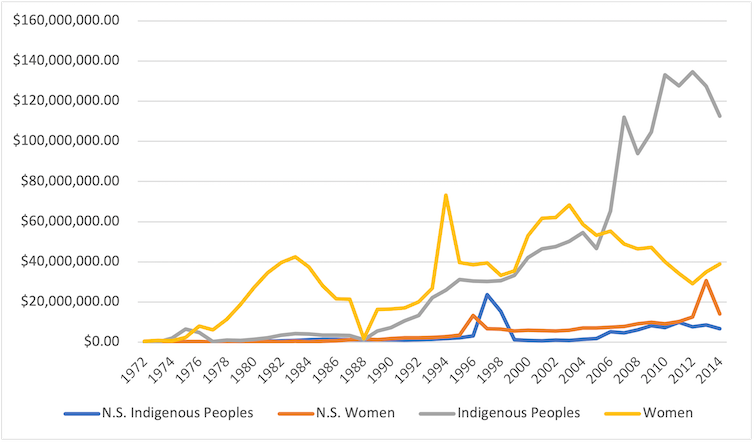 There is a remarkable disparity in funding among municipalities. Vancouver distributed more grant funding between 2006 and 2017 than our sample of 20 other municipalities in B.C. ($276 million compared to $171 million). In other words, the non-profit sector in a city of 631,486 people had access to almost double the amount of funding from 20 other cities with a combined 1,786,885 inhabitants spread over a vastly larger region.

Halifax similarly dominates the funding landscape in Nova Scotia. But the more fascinating comparison is between Halifax and Vancouver. The latter distributed three times more funding to the non-profit sector in 2014 alone ($31 million) than the combined $9 million in grants distributed in Halifax between 1960 and 2014 (or $22 million if adjusted for inflation in 2014 dollars).

How much are we talking about?

There is an extreme level of concentration in government funding for the non-profit sector. Between 2004 and 2014, among all three levels of government, more than 50 per cent of grant funding went to approximately four per cent of all recipients.

Governments in Canada have a poor history of sharing data on funding for the non-profit sector. It is a surprising lack of transparency for a policy that involves distributing millions of dollars in public funding each year to non-governmental organizations.

Non-fprofits are facing a crisis of charitable funding during the pandemic. Governments are an essential component of the funding ecosystem for the non-profit sector. Yet the lack of data makes it difficult to hold them accountable. 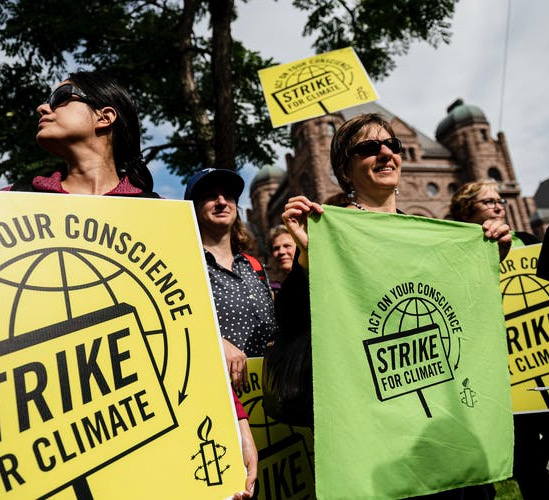