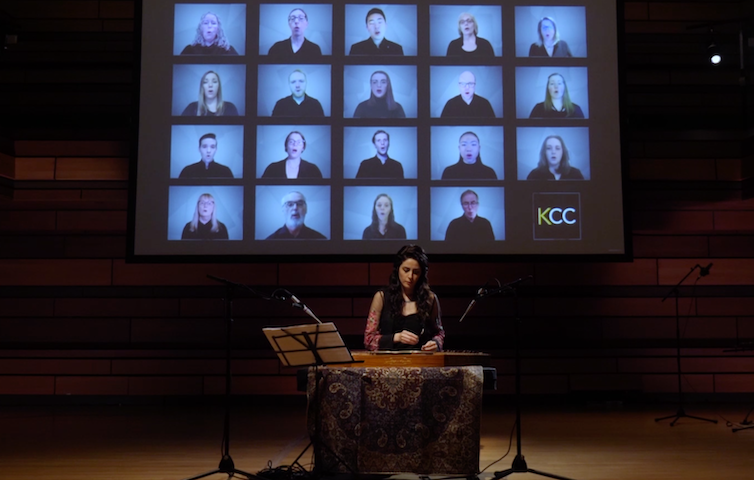 On Jan. 8, 2020, the Iranian military shot down Ukrainian Airlines Flight PS752 while the plane was leaving Iranian airspace.

In total, 176 passengers and crew were killed including 57 Canadian citizens and 29 Canadian permanent residents. The reverberations of this tragedy were felt across Canada and around the world.

A new composition, Flight 752 Elegies, memorializes the victims. This was first broadcast online in December at the website of the Isabel Bader Centre for the Performing Arts (IBCPA). The centre is located in Kingston, Ont.

At the time of the Flight PS752 plane crash, I was finishing up work on a composition for string quartet and santur. This 72-stringed instrument of ancient Iranian origin is akin to the hammered dulcimer.

The santur player for this project, Sadaf Amini, is a virtuoso performer and improvisor who was born in Iran and later immigrated to Canada. As we both reside in Kingston, it has been inspirational to hear Sadaf capture beautifully expressive melodies and complicated rhythmic textures on her instrument.

During fall 2019, we began meeting for improvising sessions where I would play the piano and Sadaf would try some of my suggested musical ideas on the santur. The initial goal was to create a composition for santur and string quartet, a project we hope to realize in the future.

In January 2020, after the tragic news of the crash, we agreed to collaborate on a work for choir and santur in remembrance of the flight’s victims. While I composed all the music for this project, I also provided a few opportunities for passages of improvisation on the santur. 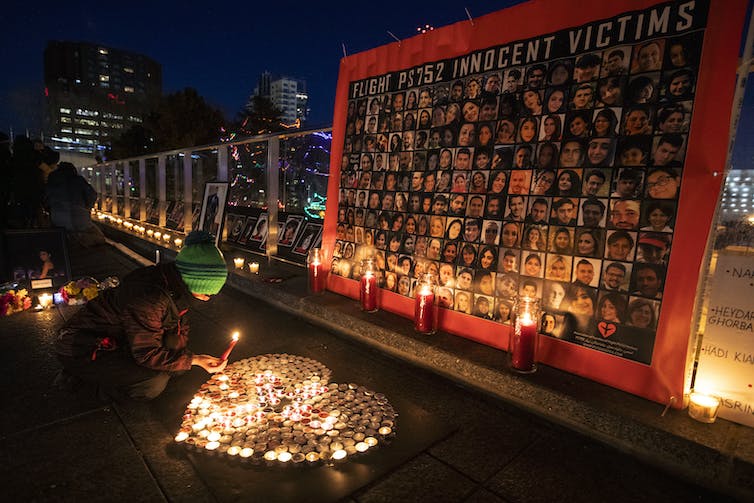 A mourner at a memorial for the anniversary of Flight PS752 in Edmonton, Jan. 8, 2021. THE CANADIAN PRESS/Jason Franson

The use of music to create a memorial tribute has a long tradition across cultures and eras. Through my training and creative work as composer I have studied a range of western classical and contemporary musical modes of memorializing.

Some memorial composition titles seek to speak directly to the audience in a powerful way, such as in naming who is being memorialized.

Out of Christian classical traditions come “requiem” compositions (from Latin, meaning “rest,” referring to a mass for the repose of the soul of the dead).

There are also “threnodies” (from Greek, a funeral lament), such as Polish composer Krzysztof Penderecki’s Threnody for the Victims of Hiroshima.

An elegy is a poem, usually a lament for the dead — but also, there are many purely instrumental compositions from classical and contemporary eras that memorialize using Elegy as a single-word title.

In titling the composition of Flight 752 Elegies, I used the plural form of “elegy” to both imply that each movement would have a different sense of lamentation, but equally to suggest that multiple elegies are required as many individuals were killed. I decided early on that the work would be in seven movements, with a duration of approximately 30 minutes.

Darrell Christie, music director and conductor of the Kingston Chamber Choir, quickly agreed to have the choir contribute to a project and proposed a premiere date in early 2021. However, these plans were put on hold due to COVID-19.

While many live, in-person events and concerts have been cancelled or postponed over the past few years, in Kingston, the resourcefulness and creativity of the IBCPA and its Imagine Project has been tremendously helpful for artists. This project provided musicians with the opportunity to use the IBCPA Concert Hall for creation-based residencies, online arts education and film/recording projects. 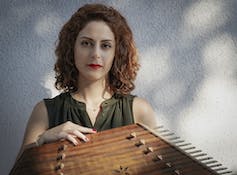 Sadaf obtained funding through this project to record a video premiere performance of Flight Elegies 752 at the IBCPA in March 2021. She was joined by soprano, Colleen Renihan, and the Kingston Chamber Choir, and I played the percussion parts.

The unifying element of this composition is that the choir sings the same wordless music for movements 1, 3, 5 and 7 which serves as a consoling chorale or refrain. Each of these refrains ends with a slightly different final cadence and is sung at a slower tempo with each repetition.

In these “refrain” movements, the santur plays independently of the choir, beginning in the first movement with rhythmic groups of seven notes, then five notes, then two.

The arc of hearing the same refrain sung by the choir with diminishing contributions from the santur, can be seen in the choir’s faces and the santur player’s movement, and heard in the music, as a real-time symbol of loss.

In the same way someone grieving can lose a sense of time, the santur’s disregard for the tempo taken by the choir in these refrains mirrors this sense of timelessness. The constant slowing down of the tempo for each subsequent statement of the refrain stretches the sustaining of notes to a level that is almost impossible to sustain. To my own ears, it voices despair.

The even-numbered movements have more active santur and choir parts, sung to poetry referencing the day of one’s death and the soul’s longing by the 13th-century Islamic mystical poet Rumi. Multiple sources of public domain English translations were used in compiling these texts.

Sadaf had long admired and studied the poetry of Rumi in the Farsi language. She indicated it seemed fitting to include the poet’s verses in the composition, especially given how Rumi is well-known in Iran, in Sadaf’s words, for his “passion to merge and unite with the original love between him and his creator.”

Rumi translator Ibrahim Gamard notes that Rumi “remains highly read and appreciated in Iran.” In a 2010 interview, he also said it’s possible the poet is more popular in the West than in Muslim countries.

Omid Safi, a scholar of Middle Eastern and Islamic studies, notes that dating back to the Victorian period, westerners began to separate Rumi’s mystical poetry from its Islamic roots with assumptions the poet was “mystical not because of Islam but in spite of it.” He has explored Rumi as Muslim sage such as in his book Radical Love: Teachings from the Islamic Mystical Tradition.

In the composition, to give the Rumi movements a more distinctive focus from the refrains, I added simple percussion parts.

Most of us cannot know the grief felt by the families and friends of those killed on Flight PS752. However, in taking a moment to listen to and reflect upon Flight 752 Elegies, it is possible to collectively, and with compassion, convey our sorrow.

There is more that could be written about this work, as well the process and efforts to create this video. But best to simply express a hope that the opportunity to observe this performance provides a focused moment of reflection and shared condolences. 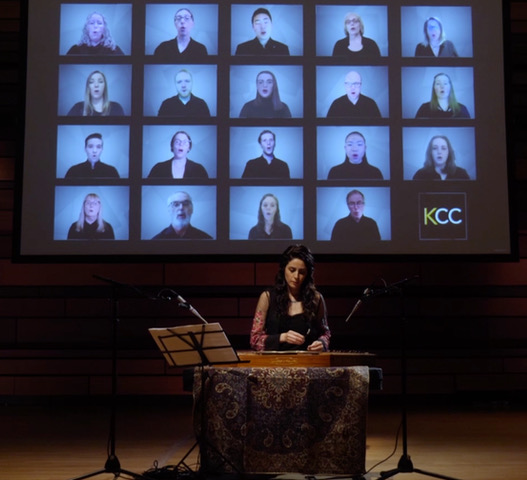