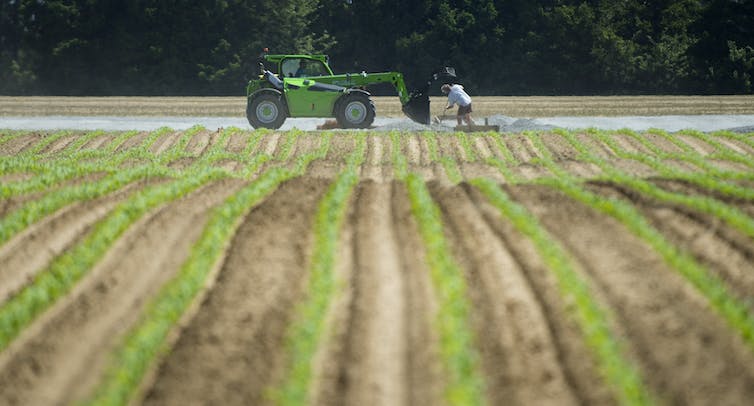 The 100 days of the COVID-19 pandemic has highlighted the strengths and weaknesses of our food system, including the treatment of migrant labourers. THE CANADIAN PRESS/Nathan Denette Evan Fraser, University of Guelph

The COVID-19 lockdown has exposed a large number of problems in the food system.

Whether it was the panic buying or workers in meat-packing plants testing positive for the virus, serious concerns have been raised about the resilience of the processes we depend upon for our daily bread.

At the same time, the people who process our food, keep our grocery store shelves stocked and run our farms have, to a large extent, managed to adapt to the greatest disruption in our generation.

We begin our journey of celebrating these accomplishments, and reflecting on these challenges, in March.

At the start of the shutdown, Canadians were shocked and scared to see grocery store shelves empty as the first wave of panic buying depleted inventories.

In retrospect, this was a relatively short-term problem, and the supply chains worked hard to restock shelves. Government helped in several ways, including by allowing stores to restock 24 hours a day. In addition, front-line food system workers received some hazard pay and there was a rapid expansion in grocery delivery services.

It wasn’t very long after this that the main food-related pandemic story was focused on Canada’s restaurants.

When the hospitality sector shuttered, over a million jobs, and tens of thousands of businesses, were lost. This also threw a wrench into our supply chains since systems that were set up to feed restaurants and cafeterias had to pivot to meet the rising demand from grocery stores.

As families reconnected over home-cooked meals and pondered planting community gardens, we also became aware that what we eat at home is different than what we eat at restaurants.

The demand for home baking supplies soared while potatoes, which mostly are eaten in restaurants as French fries, went to waste.

The industry also struggled with packaging. When restaurants purchase items like eggs or flour, they tend to buy in much larger quantities than when individual families do, so products went to waste as the packaging system worked hard to adapt.

Canadian farmers depend on tens of thousands of foreign workers coming to our country every year. The government responded by expediting visas and providing some money to farmers who suddenly had to retrofit dormitories to allow for quarantining and social distancing.

These workers have arrived in Canada, and some of them have tested positive for the virus after contracting COVID-19 here. At least two have died. Mexico has consequently barred any additional seasonal workers from coming here, at least temporarily.

Overall, worker health, farm income and Canada’s harvest are all under threat.

Workers in meat-packing plants like Cargill in Alberta also started falling ill, and at least three died. At one point, almost 75 per cent of Canada’s beef-processing capacity was shut down as companies struggled to keep workers safe. Plants reopened after retrofitting to allow for social distancing, but this continues to threaten worker health, has hurt productivity and caused backlogs in the system that reduce farm income. It also led to animals being euthanized. 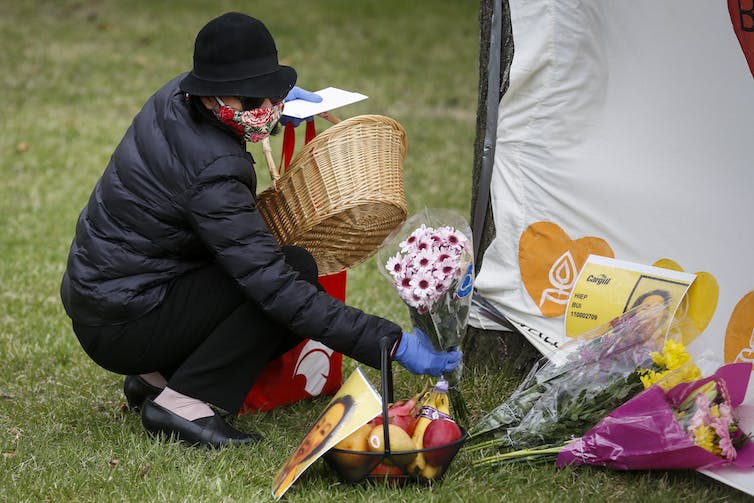 A mourner places flowers at a memorial for Hiep Bui Nguyen, a Cargill worker who died from COVID-19, in Calgary. THE CANADIAN PRESS/Jeff McIntosh

Both the migrant worker and meat-processing plant situations reveal an uncomfortable truth about Canada’s food system. The people we depend on the most to keep us fed are often the lowest paid, the most exposed to hazardous circumstances and have the most precarious employment and immigration status.

These issues should prompt a much-needed national conversation about how we treat labourers in the food system.

Lastly, one of the most significant COVID-related food stories is the rise of food insecurity in Canada and internationally.

From the beginning of the crisis, food banks witnessed startling increases in the number of people needing assistance. Governments responded by putting money into the emergency food sector in unprecedented amounts. 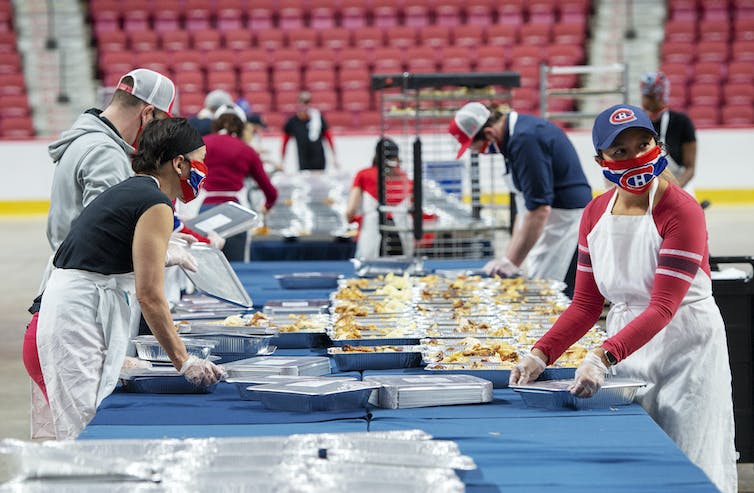 Volunteers prepare meals for food banks on the floor of the Bell Centre in May 2020 in Montréal. THE CANADIAN PRESS/Ryan Remiorz

The United Nations has warned, however, the world faces famines of “biblical proportion” due to both challenges in the supply chains, along with the economic cost of the pandemic.

The pandemic has caused ripple effects in the food system in Canada and around the world. But there are silver linings to this otherwise dark cloud. Despite the challenges, the system has performed remarkably well, and Canadians should be thankful for the ingenuity, selflessness and hard work that has gone into keeping us all fed.

At the same time, the problems revealed over the last 100 days illustrate profound structural vulnerabilities. Society is at a teachable moment, and we should take advantage of the lessons we have learned and establish the policies, programs and technologies to ensure our food system becomes stronger, more resilient and more equitable in the years to come.

This is why the Arrell Food Institute at the University of Guelph has teamed up with the Canadian Agri-Food Policy Institute — and other stakeholders from across the food system — to launch “Growing Stronger: Aiming for Resilience in our Canadian Food System.” If you would like to provide input, please consider uploading thoughts to our online portal.

The author would like to thank artist Scott Mooney for the illustrated timeline pictured above. 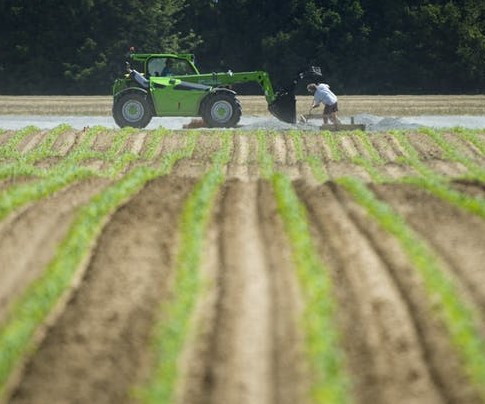