Accueil / Voix de la SRC / Can the toxicity of naphthenic acids in oil sands process-affected water be mitigated by a green photocatalytic method?

Our study evaluates the efficacy of a “green” (i.e., sustainable, recyclable, and reusable) technology to treat waste waters produced by Canada’s oil sands industry. We examined the ability of a novel advanced oxidative method—ultra-violet photocatalysis over titanium dioxide (TiO2)-coated microparticles—to reduce the toxicity of naphthenic acid fraction components (NAFC) to early life stages of the fathead minnow (Pimephales promelas). Lengthening the duration of photocatalysis resulted in greater removal of NAFC from bioassay exposure waters; low- and high-intensity treatments reduced NAFC concentrations to about 20 and 3 mg/L (by Fourier-transformed infrared spectroscopy, FTIR), respectively. Treatments reduced the acute lethality of NAFC to fathead minnows by over half after low-intensity treatment and three-fold after high-intensity treatment. However, incomplete degradation in low-intensity treatments increased the incidence of chronic toxicity relative to untreated NAFC solutions and cardiovascular abnormalities were common even with >80% of NAFC degraded. Our findings demonstrate that photocatalysis over TiO2 microparticles is a promising method for mitigating the toxicity of oil sands process-affected water-derived NAFC to fish native to the oil sands region, but the intensity of the photocatalytic treatment needs to be considered carefully to ensure adequate mineralization of toxic constituents.

Over 800 million cubic meters of water are used every year for surface mining of Canada’s oil sands (Alberta Energy Regulator 2017a). Approximately 75% of this water is recycled from tailings ponds, but the reuse of water to extract bitumen from oil sands contaminates it with solids and chemicals from the extraction process (Allen 2008). Generally, any water in contact with oil sands is considered oil sands process-affected water (OSPW), but the source, age, and exact chemical makeup of this waste water is highly variable (Li et al. 2017; Mahaffey and Dube 2017). The manner by which bitumen extraction concentrates contaminants poses a significant environmental threat to animal and human populations within the Athabasca River basin (Kelly et al. 2009), as OSPW has been empirically demonstrated to be toxic to organisms across a wide range of taxa (Li et al. 2017).

The toxicity of OSPW to aquatic vertebrates is primarily, but not exclusively, attributed to naphthenic acids (NAs; predominantly “classical” NA-O2 species, e.g., CnH2n + zO2), the central carboxyl acids of tailings pond water that are of ongoing environmental concern (Richardson and Ternes 2018). Naphthenic acids vary in size and toxicity and in their entirety, represent the total NA fraction components (NAFC) extracted from OSPW (Rogers et al. 2002). Note that acid-extractable organic compounds in OSPW are predominantly NAs (Headley et al. 2009, 2011, 2013), but they may also include other compounds such as polycyclic aromatic compounds (PACs) (Kurek et al. 2013). Concentrations of NAs range from 20 to 80 mg/L in fresh tailings (Mahaffey and Dube 2017) to 5 to 40 mg/L in reclamation ponds (Anderson et al. 2012; Kavanagh et al. 2012, 2013) and groundwater (Huang et al. 2018). NAs are not fully biodegradable and their toxic effects can persist for decades (Han et al. 2008; Marentette et al. 2015a), making natural biodegradation insufficient if tailings remediation is to be compliant with progressive environmental policies.

As a means of encouraging water recycling by the oil sands industry, the Government of Alberta put in place a “zero-discharge policy” that prevented the discharge of OSPW to the environment (Hazewinkel and Westcott 2015). While this policy was successful in increasing the water efficiency of the oil sands industry, there is now a legacy of oil sands waste stored in tailings ponds in Alberta. More than 200 km2 of northeastern Alberta is covered by over 1 billion cubic meters of OSPW stored in tailings ponds, none of which were designed with long-term storage in mind (Miskimmin et al. 2010; Morandi et al. 2015; Yue et al. 2015). This considerable volume of waste water, coupled with the potential for accidental releases, have recently shifted the policy direction toward the elimination of tailings ponds and opening the door to intentional discharge of OSPW into surrounding ecosystems (Government of Alberta 2015; Martin 2015; Alberta Energy Regulator 2017b). As treatment of OSPW is necessary to return these waste waters to natural environments, developing safe and cost-effective technologies for mitigating the toxicity of OSPW is an immediate environmental and human health priority.

Advanced oxidation of OSPW shows great potential for reducing the toxicity of fresh tailings pond water (Allen 2008). A promising advanced oxidation process is the use of photocatalysis over buoyant microparticles of titanium dioxide (TiO2), which can eradicate more than 80% of NAFC from fresh OSPW within 24 h using sunlight (Leshuk et al. 2018a, 2018b). In addition to their efficiency, buoyant microparticles offer a passive, low-energy method for reducing NAFC toxicity of OSPW, making this technology a sustainable option compared with more energy-intensive methods. However, as promising as the TiO2-mediated microparticle method is for degrading NAs in OSPW, its efficacy to detoxify OSPW has yet to be tested in aquatic vertebrates. Of particular concern to the health of these organisms is the potential for any residual effects of the photocatalytic treatment, which may arise from toxic intermediates, aromatic moieties, and recalcitrant NAs (Leshuk et al. 2018b).

The purpose of this study is to investigate the effectiveness of TiO2 microparticles for reducing the toxicity of NAFC extracts from OSPW on developing fathead minnow (FHM, Pimephales promelas), a fish native to Canada’s Athabasca River watershed, including the main stem of the river, its tributaries, and surrounding lakes (Bond and Berry 1980; Wallace and McCart 1984). This is the first study to assess the biological effects of this novel photocatalytic remediation method both in the laboratory and in the field. We hypothesized that FHM embryos exposed to solutions of NAFC treated with TiO2 microparticles would experience reduced embryotoxic effects compared with embryos in untreated NAFC solutions. Embryos were reared to hatch in treated and untreated NAFC solutions following the photocatalytic method of Leshuk et al. (2018a, 2018b). We measured endpoints of embryo mortality, survival to hatch, and frequency of developmental malformations at hatch. We conducted the experiment twice (once in an indoor laboratory and again in an outdoor, semi-natural setting) to strengthen our confidence in the reproducibility of our findings in distinct experimental settings. 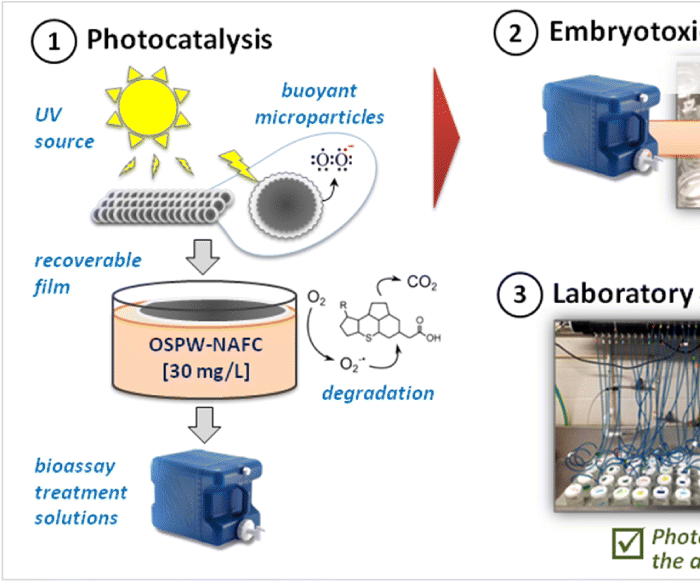