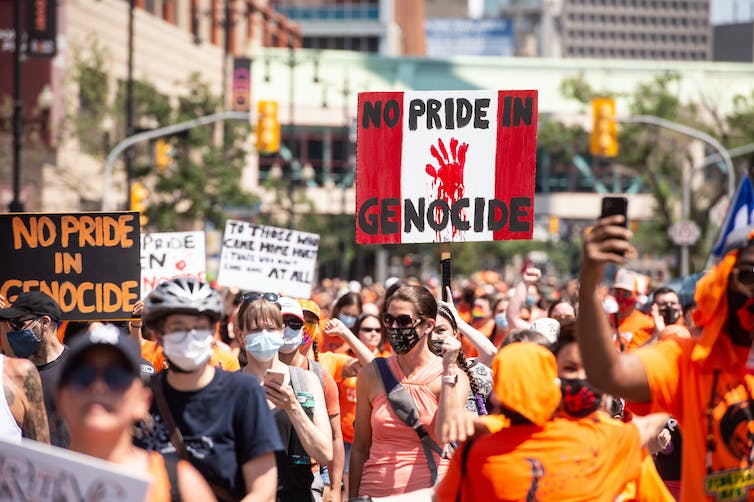 Rally participants hold up signs and wear orange shirts as they march in support of residential school survivors and the families of missing and murdered Indigenous children in Winnipeg on. July 1, 2021. THE CANADIAN PRESS/Mike Sudoma

This summer, as many Indigenous communities searched the sites of former residential schools for dead and missing children, a small group of historians insisted on debating the applicability of the term “genocide” when referring to Canada’s Indian Residential School system.

Objecting to an earlier statement on the applicability of that term made by the Canadian Historical Association, these historians penned an open letter rejecting the notion that there is a scholarly consensus on the issue and casting doubt on whether residential schooling warrants the use of the word genocide.

The letter was republished on a few websites, including one that chose the title: “Historians Rally vs. ‘Genocide’ Myth.”

As many Canadians begin reckoning with residential school history and learn how to put truth before reconciliation, we — as a historian of residential schooling and a genocide scholar — feel it is important to explain the general scholarly agreement about Canada and genocide.

A better understanding of what most genocide scholars believe can help people understand how Canada’s Indian Residential School system fits with definitions of genocide.

Definitions and the strategy of dissent

The open letter objects to the Canadian Historical Association’s claim that there is a “broad consensus” on the applicability of genocide in the Canadian context. The authors and signatories take their presence as proof that no such consensus exists.

Yet, the entire letter rests on a narrow definition of “consensus” as implying unanimity, or agreement by all people. Consensus, however, can also be used, as it is by the Canadian Historical Association, to signify a general agreement. In this usage, there’s no requirement to account for marginal, contrary voices.

The existence of a very small group of naysayers — the vast majority of them not members of the Canadian Historical Association and some of them openly engaging in residential school denialism — does not invalidate the fact that there is a general scholarly agreement, or broad consensus, that the term genocide applies to Canada.

Claiming dissent and demanding debate from the margins is a common strategy used by genocide denialists to muddy the waters and make widely accepted claims seem less certain. It is meant to shake peoples’ confidence in the general agreement.

The open letter tries to do this by insisting there is a “lively debate among scholars” when, in reality, there is only minor disagreement within the field, with still a broad consensus coalescing around the applicability of the term genocide in Canada. 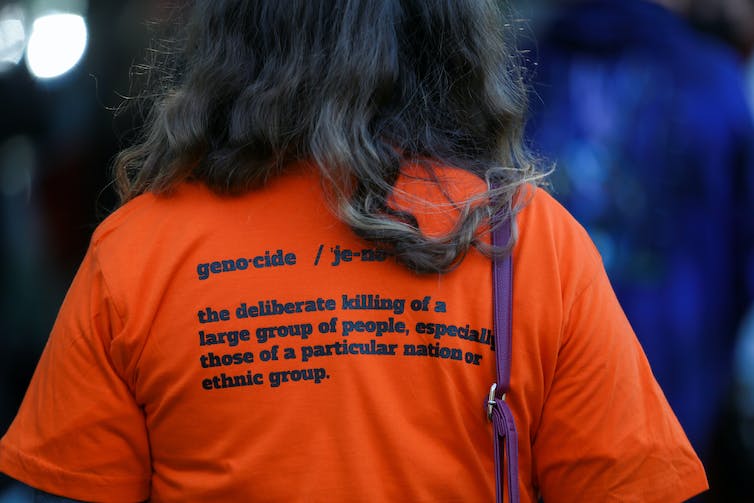 A woman wears a shirt printed with the definition of genocide printed on the back at a National Day for Truth and Reconciliation event in Toronto on Sept. 30, 2021. THE CANADIAN PRESS/Evan Buhler

So, what do genocide scholars say about genocide in Canada?

Reading the open letter, the crux of the “debate” appears to be the guilt or innocence of the Canadian state. The letter implies the latter by emphasizing there is “debate” about the former. However, where disagreement exists in the field is not so much Canada’s guilt, which is not disputed, but rather how to effectively describe the crime.

The few genocide scholars who oppose labelling what Canada did as genocide suggest that the wrongs committed are better referred to as crimes against humanity. According to the field, it is therefore a matter of choosing between two serious criminal charges rather than between guilt and innocence.

Read more: How Canada committed genocide against Indigenous Peoples, explained by the lawyer central to the determination

Genocide scholars who suggest that crimes against humanity is the more appropriate terminology point to several reasons. Scholars like William Schabas and Payam Akhavan focus on the legal challenges of determining genocide.

Their reasoning includes the fact that Article 2(e) of the United Nations Convention on the Prevention and Punishment of the Crime of Genocide, which criminalizes “forcibly transferring children of the group to another,” is largely untested in the courts.

They also point to the difficulty of establishing the specific intent required by genocide law. The UN genocide convention provides a narrow conception of what intent means, suggesting there must be a purposeful desire to destroy a group of people for who they are.

The intent to ‘destroy’

This notion raises the question of what it means to intend to “destroy” a group. Historian J.R. Miller, a signatory to the open letter, reads this word narrowly as signalling only physical destruction. He argues there was no plan to physically eradicate Indigenous Peoples. But a group can only exist through cultural relationships between group members, as well as their ability to biologically reproduce.

The UNGC includes acts of biological, cultural and physical destruction. These three primary forms of destruction were originally conceptualized by the creator of the term genocide, Raphael Lemkin.

Lemkin, in fact, contributed a richer notion of cultural genocide to earlier drafts of the UN genocide convention, which included linguistic and spiritual destruction, only to have it excised from the final text at the insistence of settler colonial nations like Canada. “Forcibly transferring children,” however, was preserved. 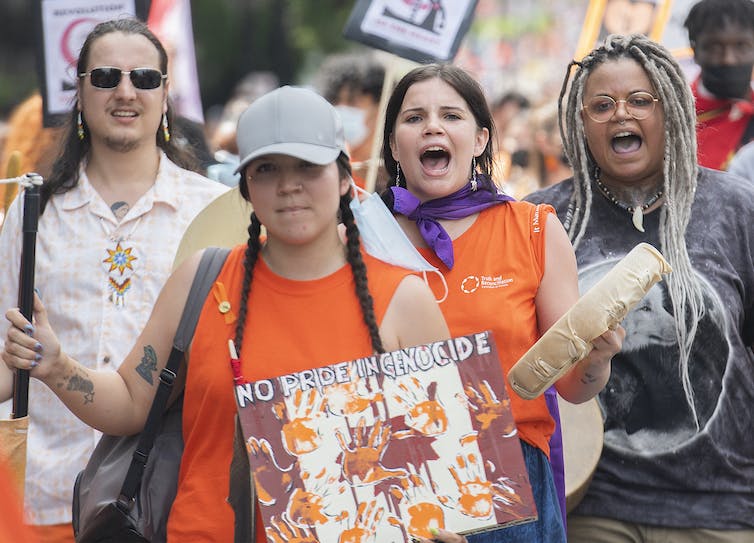 People attend a gathering and march to honour Indigenous children, denounce genocide and demand justice after the findings at residential schools in Montréal in July, 2021. THE CANADIAN PRESS/Graham Hughes

The fact that “forcibly transferring children” has been rarely tested in court does not mean that it, and the question of cultural genocide more broadly, is not being given serious attention by jurists and scholars.

For example, in Krajišnik at the International Criminal Tribunal for the former Yugoslavia (ICTY) in 2006, the ICTY trial chamber noted that destruction “is not limited to physical or biological destruction of the group’s members.” They added that a group is comprised by bonds between its members.

For this reason, the ICTY trial chamber determined that the “intent to destroy” also includes efforts to destroy a group culturally. These types of statements capture a growing trend in the field of genocide studies whereby acts of cultural destruction are viewed to be as much a threat to the life of the group as acts of biological and physical destruction.

Recent developments in Canada have built on this evolving understanding of genocide. The Truth and Reconciliation Commission of Canada, though its mandate prevented commissioners from examining the legal question of genocide, used the concept of cultural genocide to acknowledge the importance of culture to the continuity of Indigenous Peoples.

The National Inquiry for Missing and Murdered Indigenous Women and Girls had freer rein and provided a sophisticated legal analysis of genocide in Canada that injects Indigenous law and gendered perspectives into the conversation.

In the end, a broad scholarly consensus has indeed emerged in recent years that agrees on the applicability of genocide in the Canadian context. Scholars increasingly view genocide more broadly as a process, and they understand human groups as socio-cultural, biological and physical entities that may be placed under threat through multiple processes of intended destruction.

Canadians committed to putting truth before reconciliation should ignore genocide “debaters” and denialists seemingly intent on hijacking the conversation and misrepresenting genocide scholarship to defend Canada’s reputation and the colonial status quo. 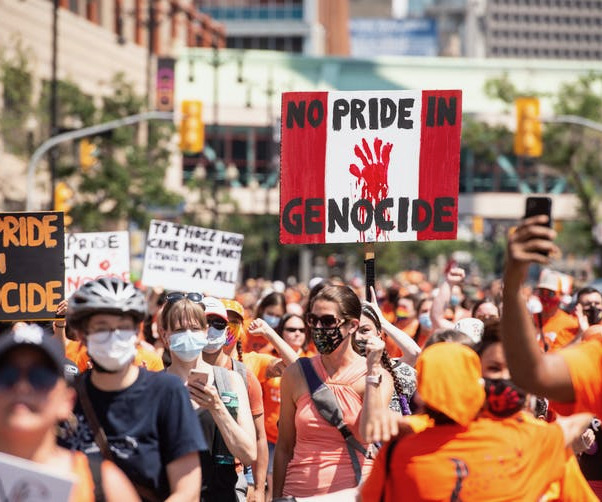