Canada exploited Chinese workers from its start. The anti-Asian racist violence during the pandemic has exposed how little has changed.

Chandrima Chakraborty is director of the Centre for Peace Studies and professor of English and cultural studies at McMaster University. She is coediting a book tentatively titled, The Return of Yellow Peril: Anti-Asian Racism during the COVID-19 Pandemic.

The history of racialized labour exploitation that began with Chinese workers arriving in Canada in the 19th century to take up jobs employers had trouble filling with European settlers continues unabated in multicultural Canada.

Canada has been applauded for being the first country in the world to adopt multiculturalism as federal policy. Multiculturalism, which turns 50 years old on Oct. 8, successfully established a positive image of Canada as a diverse, inclusive and immigrant-friendly nation.

Multiculturalism has defined national identity, resulting in Canadians perceiving themselves as tolerant, benevolent and peace-loving. It has persuaded many people to immigrate to Canada and many refugees to look toward Canada for safety.

However, multiculturalism as state policy has also perpetuated the discriminatory immigration and labour policies of white Canada. During the COVID-19 pandemic, it has become evident that Canada’s job market simultaneously relies on Asian essential workers and scorns them.

Canada has witnessed a sharp increase in racial violence against Asian Canadians during the pandemic.

The most recent uptick in anti-Asian racism is not an aberrant response by anxious or fearful Canadians during a health crisis, but the continuation of old hierarchies of racial difference, a legacy of legalized and everyday racism that structures the lives of Asian Canadians and other racialized minorities.

It will be important to ensure that anti-Asian racism during COVID-19 is not obliterated from Canada’s collective memory of the pandemic.

Robust public education, through intentional changes in school curricula and public outreach, informed by the experiences of affected communities, can help Canadians unlearn biases and understand Canada’s history of racial violence. Remembering the past might provoke inquiry into the ways things are and how they should be.

According to the 2016 census, one in five Canadians are foreign-born, and half of these are from Asia. A little more than a quarter of all Canadian children have at least one foreign-born parent. Chinese presence in Canada can be traced back to the early 19th century and Asian Canadians are sometimes called the “model minority.”

How then did Asian minorities of varying age, immigration status and national origin suddenly become objects of hatred during the pandemic?

A look back at 1960s and 70s immigration reforms is helpful in situating anti-Asian racism during the current pandemic.

British Columbia was the site of the first Asian settlement in Canada, when Chinese prospectors were lured by the gold rush. Soon after, the Canadian government actively recruited Chinese labourers to build the Canadian Pacific Railway.

After the completion of the CPR, Chinese workers began taking up employment in logging camps, fisheries and mines, before competition between white and Chinese workers culminated in calls for legislation to restrict Chinese immigration. The perceived threat fermented into a stereotype of the Chinese, and then eventually other Asians, as a menace or “yellow peril.”

The selective entry of workers based upon Canada’s economic needs continued, however. The introduction of the point system in 1967, for example, favoured immigrants from particular professions and educational backgrounds. New immigrants selected to come from Asia were largely medical, industrial and other professionals, and this change in the immigrant profile fed the “model minority” stereotype.

The celebration of the “model” multicultural subject sets off racial groups against one another and shapes the public’s understanding of national well-being and threat. It masks the fears and anxieties that the increasing visibility of racialized minorities in Canada provokes in white settlers. By inscribing inclusivity and cultural diversity as core Canadian values, Canada’s policy of “multiculturalism within a bilingual framework” articulates a narrative of tolerant nationhood, erasing claims of Indigenous peoples to their land along with the history of African Canadian slavery.

Despite the point system that enabled the entry of skilled immigrants, data shows that racialized immigrants continue to experience higher levels of unemployment and earn less income than white Canadians. Our labour-market policies have resulted in the over-representation of Asian Canadians in so-called essential jobs which are typically low-paying, low-skilled and precarious, such as warehouse, personal support, and cleaning work.

Some of the largest outbreaks of COVID-19 in Canada have occurred in long-term care and meat-packing facilities, where racialized people, including Asians, are disproportionately employed. More than 1,500 COVID-19 cases were linked to the Cargill meat plant in Alberta, the largest COVID-19 outbreak linked to a single facility in North America, where 70 per cent of employees are of Filipino descent.

The current pandemic has also brought to light how early 19th century representations of the Chinese as “a serious public health risk” combined with legalized racism in immigration policy have effectively embedded in public consciousness the perception of Asian Canadians as disease carriers and foreigners within their own nation. Yet Canada’s successful marketing of official multiculturalism as an end to past racism and the framing of recent or emergent racism as aberrations deter acknowledgement of exclusionary and discriminatory policies contributing to anti-Asian racism during the COVID-19 pandemic.

For Asian Canadians, the pandemic has intensified the racial grief of exclusion from their own nation. In June 2020, a survey conducted by the Angus Reid Institute in partnership with the University of Alberta suggested a “shadow pandemic” of racism exists. Exactly half of surveyed Canadians of Chinese ethnicity reported being called names or insulted as a direct result of the COVID-19 outbreak, and 43 per cent said they had been threatened or intimidated.

Learning the history of anti-Chinese racism in Canada can equip us to intervene in structural racism, which must take a central place in the pandemic recovery process, so that living well together, which is the premise of multiculturalism, can be grounded in justice, rather than mere tolerance of difference or selective inclusion.

This article initially appeared in the Policy Options on October 6, 2021. 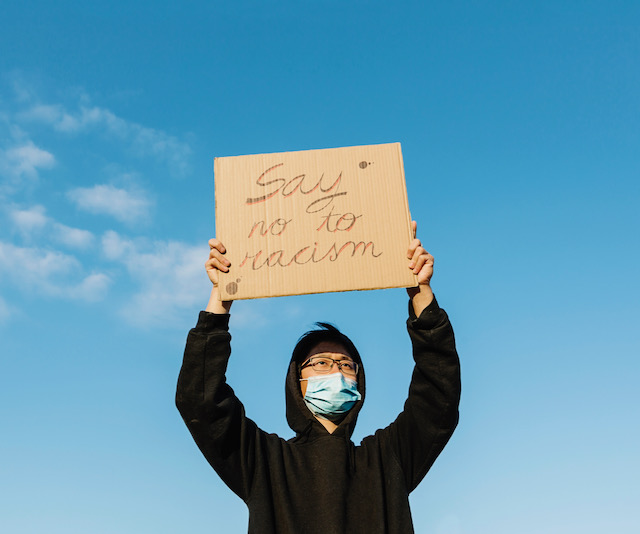