FRESHWATER FISH POPULATIONS ARE FAILING AND FORGOTTEN – EVEN IN CANADA

A recent report from the WWF reveals that nearly 1/3 of all freshwater fish species are threatened with extinction.  Indeed, 80 species have already been declared extinct, including 16 in 2020 alone.  Migratory freshwater fish have declined by 77% and iconic megafish (think of the 1000 pound white sturgeon that live in some rivers in British Columbia) by 90% since 1970. This alarming collapse has been decades in the making, especially in some of the world’s most food insecure regions where freshwater fish provide essential nutrients for children and the primary source of animal protein for over 200 million people. The livelihoods of over 60 million people, over half of them women, focus on freshwater fish harvest and processing.

Canadians are stewards and beneficiaries of millions of freshwater lakes, countless wetlands, and vast networks of rivers and streams. We may naively believe that we are not affected by these striking declines but we are. From brook trout populations that used to be abundant in the once pristine and frigid streams of southwestern Ontario to the endangered Salish sucker that lives in the highly altered lower mainland of British Columbia, too many of our freshwater fish populations are in steep decline.  A forthcoming study reports that fully 56% of Canada’s species or unique populations of freshwater fish are at risk.  Canada already has lost 13 species (10 extinct, 3 extirpated), and another 62 are considered endangered, including white sturgeon and some populations of Atlantic and Pacific salmon.  Even many common species have declined in abundance. Over two decades ago, Canadian scientists reported evidence of the “invisible collapse” of high-profile rainbow trout, walleye, and lake trout recreational fisheries, which are not even among the species considered at risk.

Freshwater fish weave through the fabric of life in Canada. Walleye and sockeye salmon, for example, are critical to Indigenous nutritional security, culture and spirituality, while recreational fishing is a national pastime, generating over $8 Billion CAN annually in economic impact. For many Canadians, “catching the big one” is the stuff of family lore and a perfect time to connect with friends. Freshwater fish are stars of community festivals and roadside attractions such as the Muddy the Mudcat statue in Dunnville or the Husky the Muskie statue in Kenora.  Canada also has a vibrant freshwater commercial fishery that sells fish domestically and to global markets.

When fish populations decline, overharvesting is often assumed to be the culprit but, in freshwater systems, other factors combine in nefarious ways. Invasive species alter food webs and compete with native fish, pollution from a dizzying array of chemicals, light and noise, fragmentation of watercourses by dams, and alteration and degradation of habitats all contribute to this decline.  Everything we do on land adjacent to waterbodies has direct effects on freshwater fish.  There is no question that climate change exacerbates these threats even further.

The federal Fisheries Act, supposedly the key guardian of fish habitat, has failed to stop this ongoing decline.  The Act was amended in 2019 to amplify its critical role in protecting and conserving fish and fish habitat, but so far we have seen only minor tweaks to implementation and declines continue.  Canada has too often treated freshwater systems as waste receptacles in the way we live, build, farm, and extract resources.  Major investments in restoration (billions, not millions of dollars) are needed to undo centuries of harm to freshwater ecosystems. Plans to “Build Back Better” in the wake of the pandemic must include recovery measures for our freshwater ecosystems, creating jobs that leave a legacy of rich and resilient natural resources.  Imperiled fish species deserve special attention.  Environment and Climate Change Canada has embarked on a promising new pan-Canadian approach to recovering terrestrial imperiled species, but a similar vision (or action) has yet to emerge from Fisheries and Oceans.

Scientists and practitioners are helping, but there is also a role for the broader public.  For decades, volunteer organizations have been painting shapes of fish adjacent to storm water sewers to remind people that anything they pour down such roadside drains makes its way untreated to the nearest waterbody.  Planting trees along streams, sharing observations of fish catches via phone apps, or following guidelines to prevent transfer of invasive species by boats, all contribute to helping freshwater fish populations.

The recent WWF report is a global call to action but is essential right here in our own backyard.  We do not have the luxury of time; extinction is forever. We must restore degraded habitats, enact and enforce strong legislation that protects fish and the communities that depend on them, and prioritize fish in our integrated water management planning.  We also need to better value freshwater fish and recognize their roles in ecosystems and the diverse ways in which they benefit Canadians.  Roadside statues should celebrate existing Canada’s freshwater fish, rather than memorials to those we have lost.

This article initially appeared in the Globe and Mail on March 3, 2021. 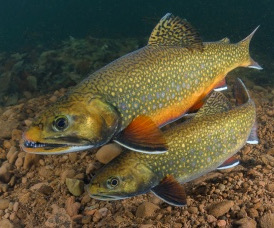