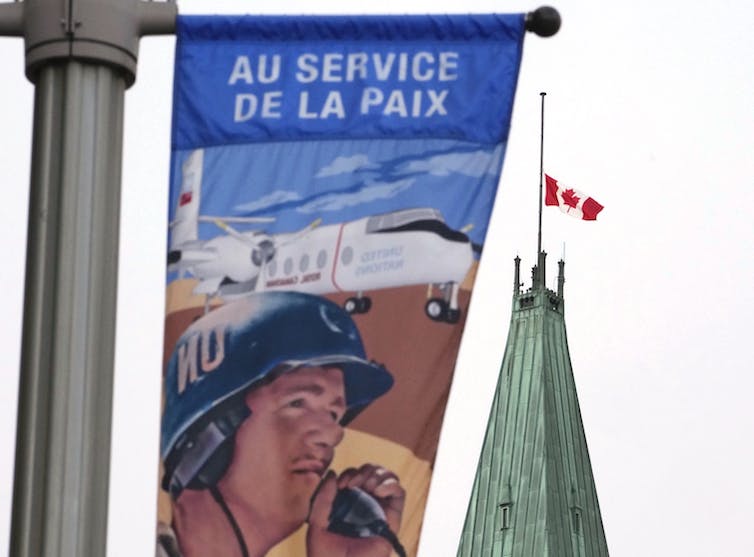 The Canadian flag has been at half-mast on government buildings since the end of May, after unmarked graves were identified at the former Kamloops Indian Residential School. THE CANADIAN PRESS/Adrian Wyld

As Remembrance Day approaches there have been concerns about honouring veterans at the same time as respecting the Indigenous children who died in residential schools.

The Assembly of First Nations has called for Canadian flags to be raised before Remembrance Day to enable a ceremonial lowering on Indigenous Veterans Day and Remembrance Day. It has also requested that an orange “Every Child Matters” flag be attached to the Peace Tower and federal buildings.

The Canadian flag has been at half-mast on government buildings since the end of May, following the finding of unmarked graves at the grounds of the former Kamloops Indian Residential School in British Columbia. In the lead-up to Nov. 11, it has been unclear when the federal government would raise the Canadian flag.

Remembrance Day and the traumas experienced through residential schools are topics that demand thoughtful engagement — especially when explored in schools. Now is a good time to consider what is worthwhile observing and remembering.

Remembrance Day offers an opportunity to observe those who served and died for the nation-state of Canada. Veterans Affairs Canada says Remembrance Day is about helping Canadians “understand the price of freedom.”

Commemorating the costs of military conflict is central to the ethos of this day. But this year, the lead-up to this observance feels different.

This difference may be because Indigenous peoples’ traumas are becoming better understood by educators and the general public.

Researchers in education, social sciences and the arts have asked critical questions about the inclusion of Remembrance Day ceremonies in schools: What exactly are we remembering or honouring? What kind of freedom has been available to whom within the borders of our own nation state? Do we know what those soldiers would have liked us to remember? 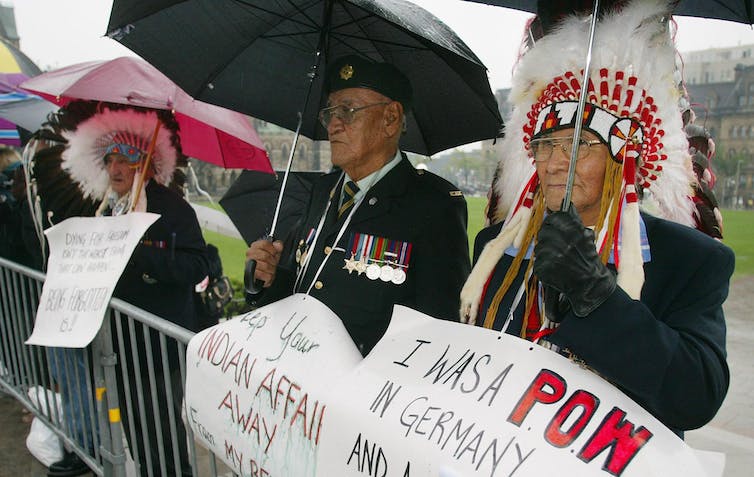 Indigenous veterans of the Second World War, Howard Anderson (right), Philip Favel (centre) and Henry Beaudry protest to save their veteran’s benefits in Ottawa, in September 2002.

These Indigenous soldiers served in defence of a nation-state that was built on their own territories, fighting in other regions of the world from which some of their comrades hailed. Occasionally, this service was in defence of the treaties abroad, while the treaties back home were being violated by colonial governments.

The contributions of Indigenous military personnel has been an important but relatively unrecognized aspect of Canada’s military history. This extends from the Kanienkeha’ka men who joined British forces in Egypt in the late 19th century (and earlier, prior to confederation) to the Onkwehón:we who were conscripted for home and overseas service in the 1940s (Onkwehon:we is a Kanienke’ha word for “First Peoples”).

Many Indigenous veterans received horrible treatment upon their return to Canada and weren’t even allowed to vote until 1960.

Examinations of our pasts

Critical examinations of our past may help develop a richer and more expansive understanding of ourselves and our past, and who and what we are as a nation.

Essential to such critical examinations is the re-examining of how we talk about Remembrance Day. An example of such re-examining in schools can include historical points such as the notion that even as soldiers were fighting in the name of freedom on other continents, often in the defence of British treaty obligations, Indigenous children on this continent were being buried at residential schools.

There can be political benefits to equipping students to think about complex issues. Schools can be key sites for the development of engaged citizens who are capable of discussing and reflecting on sensitive social and political issues.

Grappling with genocide in Canada

With efforts underway at the sites of former Indian Residential Schools to detect unmarked graves, many are concerned with a remembrance of a different sort — a remembrance that can somehow acknowledge genocide in Canada.

An integral part of building Canada as a nation was eradicating Indigenous Peoples. The purpose of the Indian Residential School system was to establish colonial sovereignty in the Dominion of Canada through the removal of Indigenous Peoples.

With a focus on one of the most vulnerable portions of any population — young children — the Indian Residential School system created a means for the nation-state to “get rid of the Indian problem.” In time, many students of such institutions would lose their language and culture, and thousands of children lost their lives. 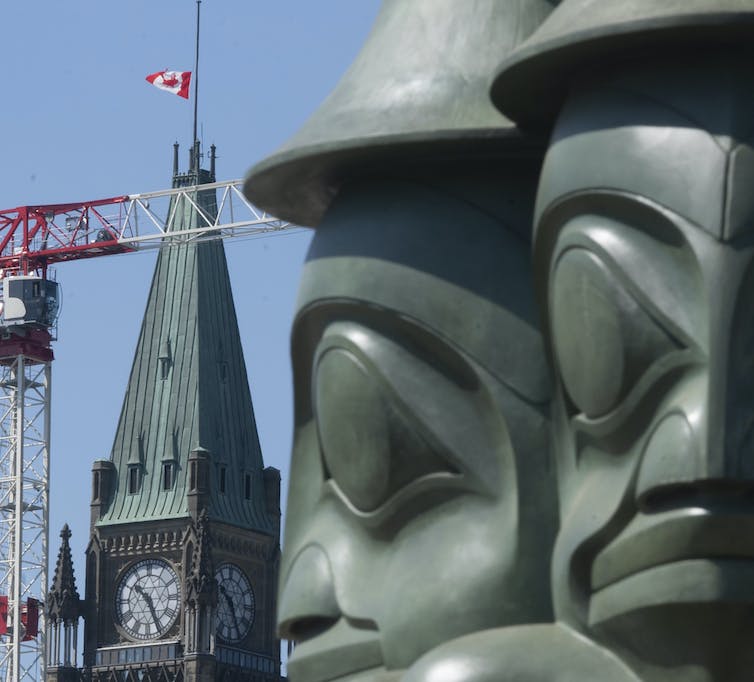 The flag flies at half-mast on the Peace Tower, seen behind the ‘Three Watchmen’ statue, created by hereditary chief of the Staast'as Eagle Clan James Hart, on June 2, 2021, the second anniversary of the Missing and Murdered Indigenous Women report.

One might argue that we should continue keeping observances about colonization in Canada and residential schools separate from memorializations about wars fought overseas.

However, the separation of these and exclusion of wars fought on this continent emerges from particular historical decisions and ensuing narratives.

A key and complex example of this is how Canada and other colonial nations participated in shaping the definition of genocide following the Second World War. Andrew Woolford, a genocide scholar, notes that Canada “voted against inclusion of cultural genocide (Article III) in the genocide convention.” One consequence of this was directing Canadians’ attention away from the effects of colonial conflict and systemic violence on this continent to our heroism elsewhere.

Keeping the Remembrance Day focus on what happened overseas may encourage people to avoid the violence that occurred back home or to maintain a belief that the only conflicts Canada has been involved have been abroad.

Addressing this requires honest conversations in schools about these issues. As is sometimes said, there is no reconciliation without truth.

Educators may consider this journey of expanding their perspectives to be difficult. But dismantling how Canadians understand what’s worth remembering is important work. Educators must continue to find ways to engage students in these difficult conversations. 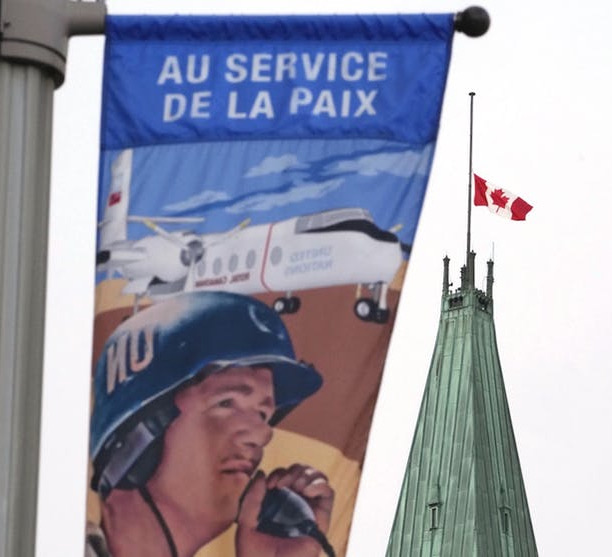