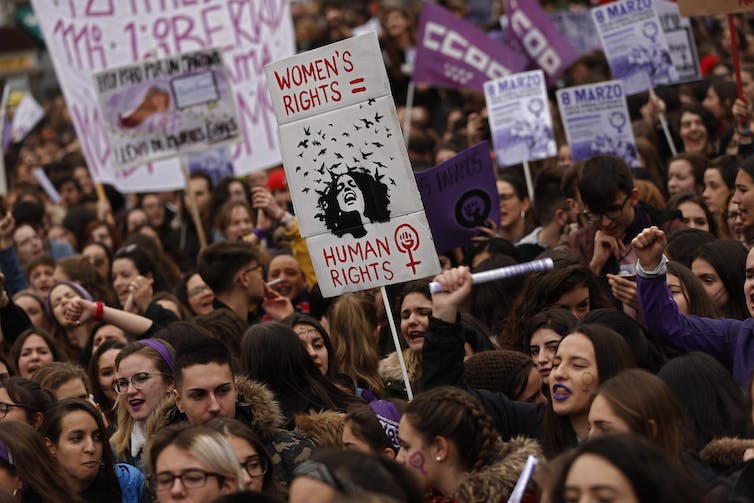 Although there is a global war on gender studies, women’s movements around the world continue to resist. Here people shout slogans during a protest at the Sol square during the International Women’s Day in Madrid, March 8, 2018. (AP Photo/Francisco Seco) Jennifer Evans, Carleton University

Recently, a bag thought to contain a bomb was left outside the National Secretariat for Gender Research in Gothenburg, Sweden. The dynamite-shaped device inside turned out to be a fake, but the intent to threaten and scare was clear.

Eva Wiberg, Vice-Chancellor of the University of Gothenburg, expressed her grave concerns, saying some scholars are more exposed to hatred and violence than others.

Lately, we have witnessed global story after story of government rollbacks on abortion provision, LGBTQ rights and now the closure of entire programs devoted to women’s and gender studies. It is part of the populist playbook in places like Poland and Hungary.

Brazil’s President Jair Bolsinaro put it bluntly in his inaugural address on Jan. 2. He will fight the “ideology of gender” teaching in schools, “respect our Judeo-Christian tradition” and “prepare children for the job market, not political militancy.”

The war on gender studies is a pillar in the authoritarian critique of liberalism. But for many scholars, it is a sign of the times for liberal democracies as well.

Proponents use “gender ideology” and “gender theory” as a catch-all to oppose marriage equality, reproductive rights, sexual liberalism and anti-discrimination policy generally. In their book, Anti-Gender Campaigns in Europe researchers Roman Kuhar and David Paternotte note that several parts of Europe are facing new waves of resistance to “gender theory.”

This trend is a global concern, part of a neo-traditionalist turn in how we meet the challenge of sexual rights and gender identity in the 21st century.

The extreme reaction against gender and sexual equality is indicated by the spike in hate crimes against sexual minorities, in brutal acid attacks and in the countless #metoo testimonies. It has seeped into the policies of traditional conservative parties all over the world who cozy up to right-wing populists to salvage popular support.

In Ontario, the sex education curriculum has come under attack. Such straightforward things as teaching teens sexual consent and LGBTQ family structure have become political.

Anti-gender studies campaigns have a long history in all parts of the world, and they have long moved outside the borders of increasingly authoritarian regimes. 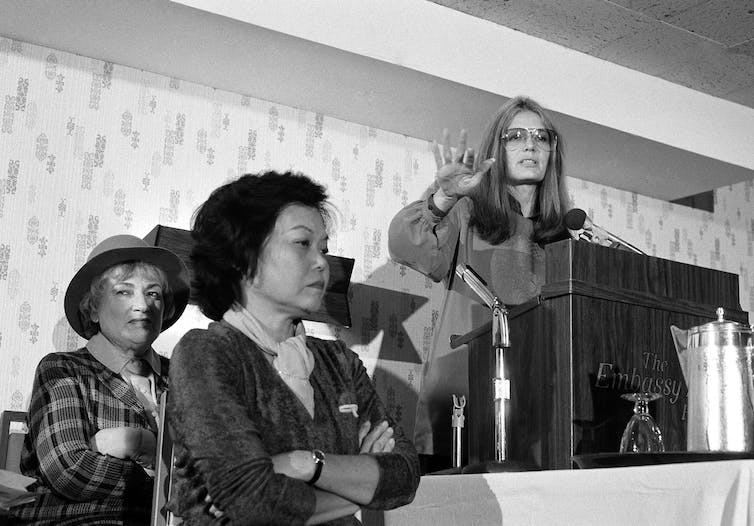 In this 1979 photo, Bella Abzug, left, and Patsy Mink of Women USA sit next to Gloria Steinem as she speaks in Washington where they warned presidential candidates that promises for women’s rights will not be enough to get their support in the next election. (AP Photo/Harvey Georges)

These new campaigns transcend borders. They unite Catholics with Evangelicals, secularists and the devout. They challenge academic integrity while shoring up government policy limiting reproductive rights, propping up a particular image of the family as natural and universal. Although they take on the appearance of a popular movement, they are often stage-managed and supported by popular politicians. The Vatican’s role has been vital, with Pope Francis going on record at World Youth Day in 2016 saying gender theory is a form of “ideological colonization.”

A product of the social movements of the New Left, women’s and gender studies departments (many are now gender and sexuality studies programs) never shied from the difficult task of exposing structural violence and inequality through systemic studies of sexual violence, harassment, labour and racial inequity, citizenship, war and militarization.

Although not without its own blind spots — feminist researcher Chandra Mohanty famously pointed out the U.S. imperialism and colonialism within western feminist movements — feminist studies have weathered various storms to hold universities, government and corporations accountable for failing to uphold minority rights around access to power, representation and equality.

But the appeal of this illiberal backlash is great. Although chiefly the preserve of right-leaning parties, even Ecuador’s former leftist president Rafael Corrêa trumpeted the claim in 2013 that feminists, LGBTQ activists, and gender warriors were actively mobilizing against traditional values.

The austerity measures in Europe and the U.S. of the mid-2000s put added pressure on gender studies departments in the U.K. but also globally to prove their mettle.

A new wave of violence

The anti-gender studies movement has not been without violence. Professors, like Paula-Irena Villa, chair of Sociology and Gender Studies at the Ludwigs-Maximilian-University of Munich, receive hate mail after speaking about gender equality with the media. Feminists are regularly trolled online. Calls to report teachers have surfaced in the U.S. and Germany.

Last November, prominent queer theorist Judith Butler was attacked by a mob in Brazil to protest her visit as “a threat to the natural order of gender, sexuality and the family.” Anti-Butler demonstrators, mobilized via social media, took to the streets of Sao Paulo. They burned her likeness in effigy, a practice that conjured the inquisitorial history of targeting witches, Jews, heretics and sodomites. Far right groups followed her and her political scientist partner Wendy Brown to the airport where they were targeted with more slurs and well-worn charges that leftists, Jews and sodomites were behind the threat to traditional values. 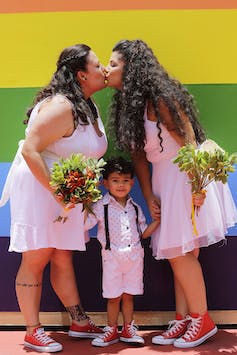 Newlyweds Thais Lococo Hansen, 32, left, and Catarina Brainer, 28, share a kiss, as their son Pietro, 3, looks on during a group marriage of forty same sex couples in Sao Paulo, Brazil, on Dec. 15, 2018. With the election of ultra-rightist Jair Bolsonaro as president, hundreds of same sex couples began to marry. (AP Photo/Nelson Antoine)

This new war on gender studies is not solely targeted at the “threat of cultural Marxism.” It is not the preserve of fledgling democracies. Its reach is comprehensive and broad. It is part of a new kind of culture war that targets research in gender and sexuality.

It is a backlash against sexual liberalism in all its forms. It might seem most obvious in arguments against sex education and universal bathrooms. But it is no less active in the hypocrisy of social media conglomerates in regulating sex positivity in the name of child protection.

At precisely the moment of increased visibility for feminist, sex positive, and LGBTQ-desiring people, even the staunchly egalitarian jargon of the social mediascape has fallen prey to fear mongering and moral panic.

The pessimist in me sees dark times ahead. The historian in me knows that backlash and opposition breeds resilience. Here’s hoping the historian wins out. 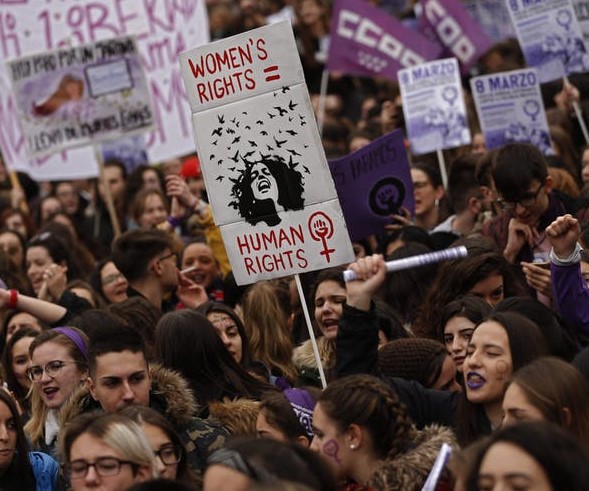