Paul Bramadat is the director of the Centre for Studies in Religion and Society at the University of Victoria.  Benjamin L. Berger is Professor and York Research Chair in Pluralism and Public Law at Osgoode Hall Law School, York University.  Noni MacDonald is Professor of Pediatrics and Dalhousie University and IWK Health Centre in Halifax.

As Canada embarks on the largest immunization program in its history, vaccine hesitancy presents a significant risk to this critical public health project and, with it, Canada’s path out of the pandemic. In the resulting debates and discussions, eyes commonly turn to religion as a potential obstacle to vaccine uptake. But to advance the vaccination project, better questions must be asked and answered: how should we understand the role of religion in vaccine hesitancy and, most importantly, how can we productively respond to the attitudes and concerns that generate it?

Religious concerns about immunization have been raised since the late 1700s when vaccination was introduced into western medicine. Recent scholarly work and surveys by the World Health Organization and UNICEF found that religious concerns were often inextricably bound up with hesitancy with respect to infant and childhood vaccines around the globe. In Canada formal religious concerns have not been especially prominent in vaccine hesitancy survey data, but there have been outbreaks of vaccine preventable diseases in some religious communities that eschew some aspects of conventional health care, including immunization. For example, a recent study on vaccine acceptance for school age children from Ontario revealed that hot spots for under-immunization were often clustered, and in some instances closely associated with specific religious communities.

To understand and reduce religious opposition to immunization, many of us seek out public health data as well as theologians and pastoral leaders who might explain or defend institutional or historical stances. The good news is that research suggests that contemporary religious institutions and leaders overwhelmingly see vaccines as being consistent with internal values such as caring for others, preserving life and having a duty to community. Although notable exceptions do exist, the major religious traditions with which most are familiar do not eschew vaccines.

Nevertheless, while this general observation is encouraging, it is also worthwhile to make at least two observations. First, religious, spiritual, and social forces do not combine in the minds and habits of individuals and communities in predictable, straightforward ways. For example, even though the official statements of the Anthroposophy Medical Association are strongly supportive of vaccines, in practice some parents of children in Waldorf schools (rooted in Anthroposophy) shy away from vaccination of their children. As well, despite the tenet of Christian Science that illness is an illusion that can be cured by prayer, acceptance of vaccines is seen as a free choice and not disparaged.

Second, the boundary between “religious” and so-called “cultural” reasons for vaccine hesitancy is much more unstable than we normally think. Here we need to note the spiritual components of many alternative or complementary health norms and practices such as reiki, homeopathy, Ayurveda, Traditional Chinese Medicine, and some forms of yoga – just to name a few of the more popular modalities with which vaccine hesitancy is sometimes correlated.

It might be better to think of vaccine hesitancy as a rhizome, with entangled root systems, wide-ranging nodes and above-ground shoots that often change appearances. If we are interested in eradicating or even just pruning this complex organism, we should expect that it looks different in different times and places. This allows us to focus on the ways otherwise unconnected communities in which some kind of religion or spirituality is at work (advocates of homeopathy and adherents of Reformed Protestantism, e.g.) imagine health, threats to health, and the sources of trustworthy information to address those threats. In vaccine hesitant communities, health is often understood to be a function of an individual’s correct orientation to powers and principles both seen and unseen. Another common node of hesitancy for some is the sense that the dominant biomedical explanation of the way the body and pathogens work is inadequate or disrespectful, hostile to richer, more complete perspectives on wellness. In some hesitant communities one often finds a mistrust of government authority in general and state-sanctioned information or programs in particular, all of which are framed as antagonistic to deep commitments about a good life. Though found in small numbers of communities we classify as “religious,” these attitudes are far from exclusive to them.

So, what does this all add up to in the pressing task of plotting out productive responses to vaccine hesitancy? First, we must bear in mind that in order to control the COVID-19 pandemic, high vaccine acceptance is needed, potentially 80% uptake. As such, whether vaccine hesitancy is articulated in religious or non-religious terms, it is imperative that we work to address all concerns that arise.

One important step is to slow down and listen carefully to the concerns within the community in question. In some instances, the biomedical facts will be enough to allay concerns, quite apart from whether we share the worldview that generates those objections.  For example, one concern raised about vaccines, sometimes with a religious overlay, has been about use of cells and tissue culture components derived from humans and/or animals. However, the two COVID-19 mRNA vaccines now approved for use in Canada do not involve cells or tissues, making these concerns/arguments irrelevant, yet it is not clear how many Canadians understand this aspect of the mRNA vaccines.

In many cases, the issue is not a simple lack of information but, as we have explained, a lack of trust in mainstream authorities and experts. Here, efforts should be made to build partnerships at the community level. This is a pragmatic and humble acknowledgment that making COVID-19 vaccine acceptance a normative behavior is far more influenced by what we see and hear in our social networks and closer communities than it is by law, regulation, and broader public policy. In this respect, our point is that responses to religious communities with concerns about vaccination should not be fundamentally different than how we would approach hesitancy in any community: We can be nudged to accept the COVID-19 vaccine by having those we trust support vaccine acceptance, as well as ensuring that access is easy. Hence, it behooves public health workers to partner with leaders of local communities (regardless of how they define themselves formally), ensuring they are well informed about the benefits and safety of COVID-19 vaccines and the risks of COVID-19, empowering them to engage members of their congregations in conversations that are as meaningful as possible. They need to be encouraged to speak up about the safety profile of COVID-19 vaccines and their crucial role for regaining control over our health and our lives. Specific concerns (both religious and otherwise) must be addressed; potential adverse effects must be acknowledged; past discrimination must be accepted; making vaccine access work well for all subgroups must be collaborative and well supported. Given the data in the COVID-19 vaccine hesitancy surveys, religious communities associated with ethnic and visible minorities may be especially key partners in helping to promote vaccination campaigns.

The concerns about vaccine hesitancy found in some communities can swiftly move the debate to questions of legal mandates and penalties, predictably producing competing claims about religious freedom and conscience-based exemptions. As is so often the case, turning too swiftly to law on truly complex social issues distracts us from the most productive paths to achieving our goals. We cannot afford that. What we need is to marry our fidelity to scientific fact with an equally energetic commitment to engaging with communities, understanding their values, and focusing on building trust. That is the public policy burden of the pluralism that so enriches us.

This article initially appeared in the Globe and Mail on February 5, 2021 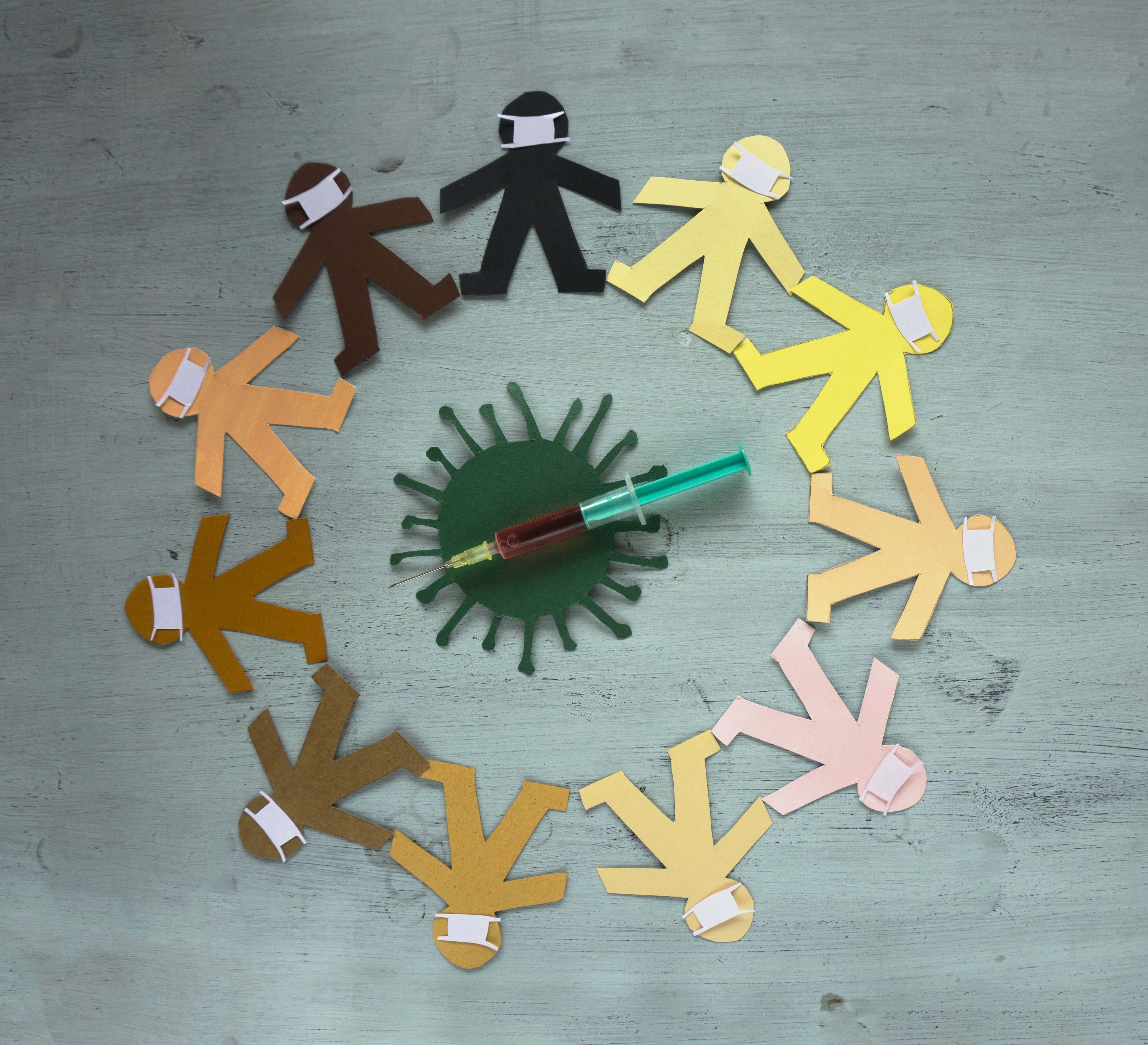