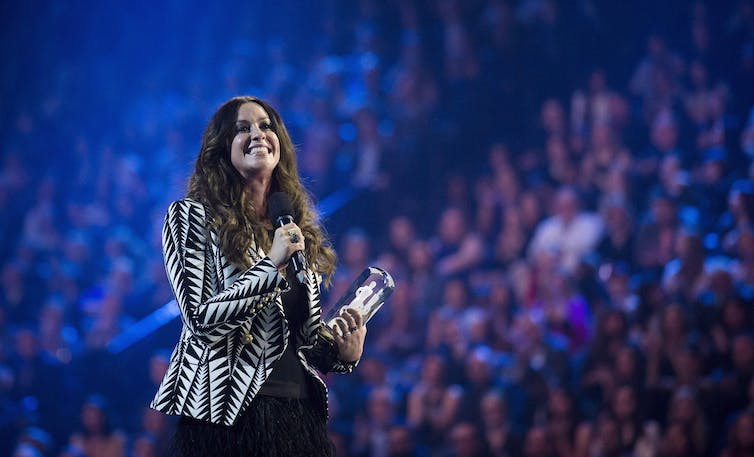 Artist Alanis Morissette receives her lifetime achievement award from the Canadian Music Hall of Fame during the 2015 Juno Awards. THE CANADIAN PRESS/Nathan Denette

The Junos and sometimes controversial Canadian content regulations came into being at around the same time to promote Canadian culture to Canadians. Whatever the award’s name, the winning song emphasizes Canada’s place on pop music’s world stage. Reflections on these songs, both personal and historical, make the music even more compelling. Here’s a look at earlier years.

If someone announced that they can’t feel their face when they’re with you, you would obviously think something was very wrong; you may even want to offer assistance to alleviate their discomfort. But not the female interlocuter in The Weeknd’s song “I Can’t Feel My Face.”

Instead, the song goes, “She told me, ‘Don’t worry about it/She told me/Don’t worry no more.’” The Weeknd exploits both the drama of the claim and the felt sense of human pity it evokes in the titular refrain, to which he quickly adds “but I love it, but I love it, oh.”

The video for I Can’t Feel My Face.

Some admirers think the song is about The Weeknd’s use of drugs, perhaps cocaine, which is personified as female. Others believe the song is an ironic ode to The Weeknd’s love interest at the time, model Bella Hadid. 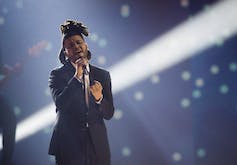 The Weeknd performs during the 2015 Juno Awards in Hamilton. THE CANADIAN PRESS/Nathan Denette

Both interpretations can be simultaneously true; that is the very point and power of lyrical expression. The song is dark. Yet it makes us dance. It confesses a public taboo. Still, we bop.

Great lyricists, like The Weeknd, take our social privacies, place them on poetic display and elevate them so that listeners share, even if unwittingly, an emotional response. So as much as the song is a catchy dance hit, it is an opportunity for cultural reflection on what makes us tick, on why, as humans, we are often addicted to experiences and people who are otherwise bad for us. 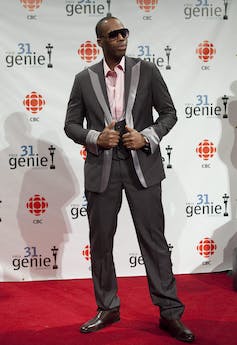 Kardinal Offishall arrives on the red carpet for the 31st Genie Awards in Ottawa in 2011. THE CANADIAN PRESS/Fred Chartrand

Leading up to his 2009 Junos Best Single of the Year, Kardinal Offishall was already a legendary rapper and expert MC in Canada. Yet “Dangerous” was his introduction to the rest of the world. He became the first Canadian rapper to appear on the U.S. Hot 100 Billboard chart, peaking at No. 5 in May 2008.

The song is a classic radio hit in both arrangement and composition. At the same time, it’s a distinctive Toronto anthem. It fits into a larger legacy of Black Canadian youth music — part of what scholar Rinaldo Walcott argues is Caribbean pop culture in Canada as a site for identity-making and space-taking.

Offishall is a long-time ambassador for the AfroCaribbean diaspora in Canada. In “Dangerous,” Jamaican patois gets mixed in with classic rap topics (“When she on the dance floor, gyal dem irate.”)

In this way, “Dangerous” represents a specific kind of belonging to Black Canadian culture that scholar Murray Forman notes is long-rooted in AfroCaribbean traditions.

Read more: The Juno Awards finally celebrate hip hop, but is it too late?

“Dangerous” was a cultural moment for Canadian hip hop due to its commercial success, but also its representation of the AfroCaribbean diaspora in Canada that’s used hip hop as a way to fit into, rebel from and, as scholar Mark V. Campbell notes, challenge perceptions of Canadian identity.

Gord Downie, The Tragically Hip’s leader and lyricist, built the “Single of the Year” in 2000 on the contrast between Toronto and rural Bobcaygeon, a name that is probably indebted both to French and Indigenous sources.

The narrator tells a story of having spent the evening with his lover, where they enjoyed “the wine” and “the Willie Nelson,” a reference that conjures both the famous American singer and his decades-long crusade to have marijuana legalized.

In some concerts, Downie described “Bobcaygeon” as a “song about a gay cop.”

Verses one, two, five and six all open with a line that ends “your house this morning,” emphasizing the centrality of the lover’s home. Driving “back to town” in the morning sends the narrator “back to bed.” The quadruple rhyme — “Hang,” “sang,” “rang,” and “twang” — drives the song to its crescendo. 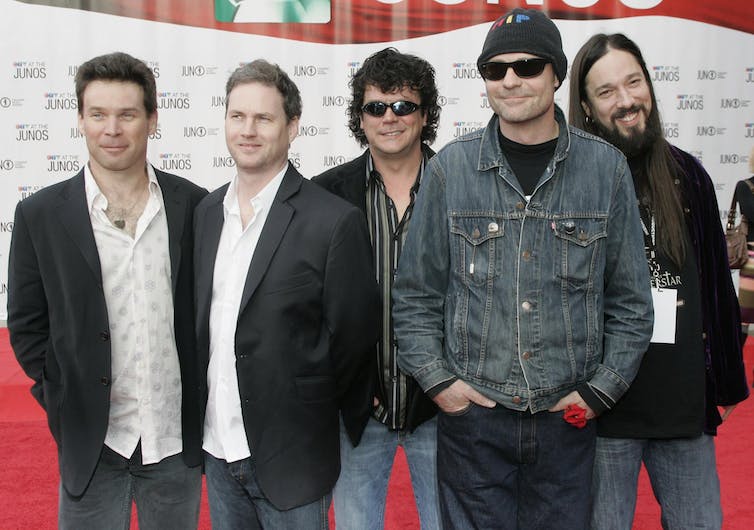 Members of The Tragically Hip, including Gord Downie in a toque and sunglasses, pose for photographers on the red carpet as they arrive at the Juno awards in Winnipeg in 2005. (CP PHOTO/Marianne Helm)

There are troubling hints of violence turned against others and the self, with reference to “that riot,” an “Aryan twang” and thoughts of “maybe quitting … leaving it behind” — possibly implying quitting work drudgery or something significantly darker.

The song has become “woven into the fabric of the Canadian imagination by The Tragically Hip,” as journalist Adrian Lee observes. Yet as Downie makes clear, it could have been “any small town really.”

The song is a multi-levelled meditation on the interplay of personal intimacy, beauty, violence and despair — themes that Canadians must urgently grapple with at the centre of their colonial mythology.

Despite sweeping success at the 1996 Junos, more than 33 million sales worldwide and the reinvention in 2019 as part of an award-winning Broadway musical, Alanis Morrisette’s “You Oughta Know” is sometimes regarded simply as the angst-ridden ravings of an angry young woman, spurned by a lover and hysterical. But as musicologist Karen Fournier emphasizes, for Morrisette, “the personal is political.” The singer unapologetically bares her soul in “You Oughta Know” — an action that challenges gendered norms and presumes a right to speak and be heard.

Writer Marisa Crawford notes that Morissette’s music emerged in the wake of Anita Hill’s testimony to the U.S. Congress and legislative changes that supported victims of sexual harassment. In the recent musical, the plot directly confronts sexual violence and the #MeToo Movement.

In the summer of 1985, if you were listening to the radio or watching MuchMusic, you inevitably heard or saw Corey Hart singing his hit “Never Surrender.” They are the same words that resonated not long ago in Nehiyaw text-based artist Joi T. Arcand’s art work, in which she takes Hart’s “Never Surrender” lyrics and translates them into Cree syllabics to honour her own heritage, solidarity-building among Indigenous communities and to acknowledge that Indigenous Peoples are still here on Turtle Island.

“Never Surrender.” These are the words that Indigenous people still voice today in fighting oppression and to press governments to provide what ordinary Canadians take for granted, like clean water, health care and access to education.

In 1985, when the song was released after some 150 years of disempowerment and genocidal tactics like residential schools and the Pass System, Indigenous peoples finally had their constitutional rights confirmed just three years earlier, in 1982.

But what did these rights mean for a people still attending residential schools, still living in abject poverty? What did it mean if the legal system still held to the fiction of Terra Nullius, Christopher Columbus and the Doctrine of Discovery?

There is an irony here. This is a celebrated song by a white, male Canadian singer whose moody music video suggests it is centred in his limited and privileged perspective on teenage angst. Yet, through an Indigenous lens, the lyric “And if your path won’t lead you home/ You can never surrender” is given the weight of history.

The video for Never Surrender.

In the final months of 1980, two events marked a new era in North America’s economic and cultural zeitgeist — Ronald Reagan’s election as president of the United States and, within weeks, John Lennon’s assassination. The ideals of the 1960s were officially dead. A new neo-liberal agenda — favouring individualism, competition, and, ultimately, massive inequality — was taking hold and by 1983, arms control and escalating international conflicts were also on the minds of many. Even music had lost its teeth: punk was waning, video gaming’s popularity was up and record sales were down, prompting music critic Anthony De Curtis to conclude that, “It hardly seemed as if music mattered at all.”

But music did matter, and, in 1983, the Parachute Club’s release of “Rise Up” proved just that. Part of the song’s initial and enduring success is, of course, its infectious melody with its influences of Caribbean reggae and soca (the first Canadian pop hit to do so). The all-important lyrics were specific enough to inspire feminism (“woman’s time has come”), peace and queer rights (“freedom to love who we please”) but broad enough to rouse all who listened. 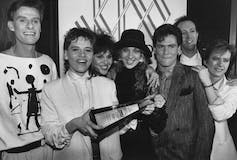 Members of the Parachute Club, including singer Lorraine Segato (second left), celebrate after winning Juno awards for single of the year and most promising band at the Juno Awards in Toronto in 1984. (THE CANADIAN PRESS/CP)

First performed at the 1983 Pride Parade, the song reflected a new hope in the era of the newly signed Canadian Charter of Rights and Freedoms and, unsurprisingly, went on to become a queer anthem. In the Canadian video, the band, with a parade of youth, unabashedly and proudly danced through the streets of Toronto. In the face of personal adversity and international uncertainty, “Rise Up” helped many of us feel like we were visible, hopeful, and for a moment, free.

In 1979, “Hot Child in the City” marked the second Best Selling Single Juno for Nick Gilder. His band, Sweeney Todd, scored the award two years earlier with “Roxy Roller.” The week “Hot Child” hit the top of the Billboard charts was a big one for Canada as Anne Murray’s “You Needed Me,” was No. 2. Gilder’s international success led him to write songs for artists that included Joe Cocker and Pat Benatar. 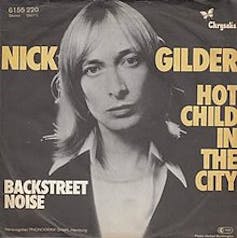 ‘Hot Child in the City’ single, by Nick Glider. (Chrysalis)

Gilder’s music and live performance place him in the realm of glam rock. Glam’s harder-edged sound and gender-bending associations are a precursor to punk, and many of its catchiest songs dealt with counter culture and the dark side of street life.

Energetic, infectious, though seemingly insubstantial songs by David Bowie and Gary Glitter of this era belie themes of heavy drug use and sexualized violence. Musically and thematically, “Hot Child in the City” bears some similarity to live versions of “Sweet Jane” by Lou Reed, one of the grittiest writers, in his glam days.

Listeners have missed it for years, but Gilder discussed the song’s darkness and the leering narrator voice of “Hot Child” with Rolling Stone. His lyrics are critical of the street scene and the predators who drive it, starkly contrasting the bouncy, catchy pop music that accompanies them. 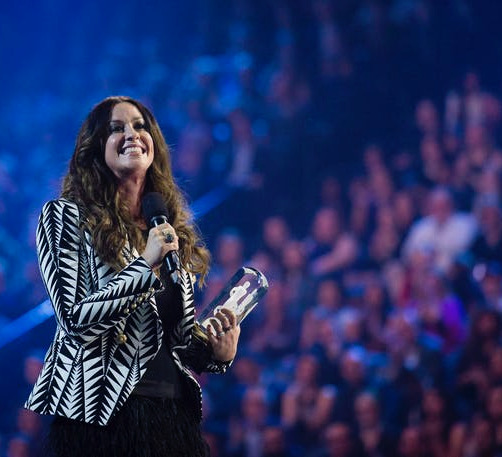