Accueil / Voix de la SRC / This federal election, the Liberals are outspending all the other parties combined when buying ads on Facebo 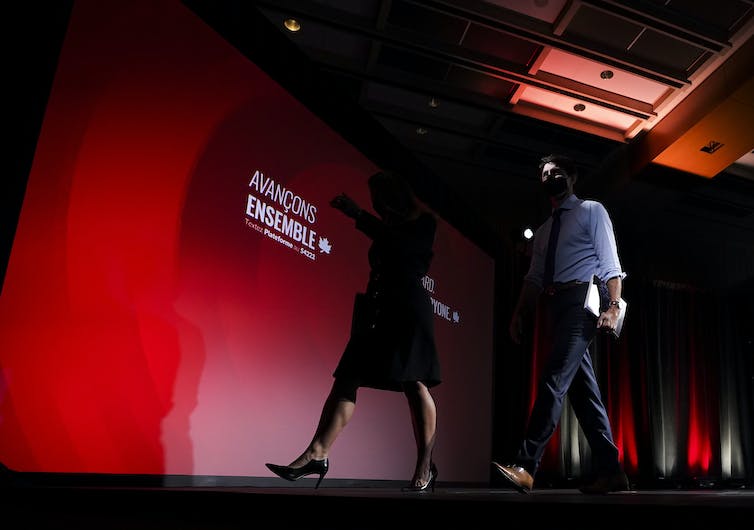 Today, 94 per cent of Canadian adults who use the internet have at least one social media account, and 83 per cent report having a Facebook account. This trend will likely continue as more people turn to the internet and social media to stay connected.

The shift in how and where people spend their time and attention has given rise to a widely adopted practice called microtargeting. Microtargeting is a marketing strategy that relies on using users’ demographic and social media data — the things we “like” on social media, who we are friends with, businesses that we have frequented, etc. — to identify and segment people into narrowly defined small groups in order to show them personalized ads.

In recent years, digital political ad spending has exploded. And in this federal election, the Liberal Party of Canada is outspending all of the other major federal parties combined, while the NDP’s political ads are being shown to Facebook users under 18.

As a platform, Facebook is a finely tuned microtargeting machine. It’s one of the main reasons why political campaigns in places like the United States have been “flooding Facebook with ad dollars.”

This trend is also happening here in Canada. Using Facebook’s Ad Library, we found that between between July 31 and Aug. 29, major political parties in Canada had spent nearly $2.5 million across Facebook, Instagram and Messenger. The federal Liberal Party alone spent $1.5 million on 7,038 ads, far outpacing the combined spending by the other major federal parties.

As part of the Social Media Lab’s Election 44 transparency and accountability initiative, we have been tracking Canadian political ad spending on Facebook using PoliDashboard, a data visualization tool designed to help voters, journalists and campaign staffers monitor political discourse in Canada. The dashboard is part of our ongoing research on online engagement and the use of social bots to influence public opinion on issues of national importance, like the elections and the ongoing COVID-19 pandemic.

PoliDashboard is publicly accessible and consists of two main modules. The first is the #CNDPoli Twitter Module which provides near real-time analysis of #CDNPoli public tweets, including detecting the presence of bots or automated accounts. The second is the Facebook Political Ads Module, which collects and analyzes data about political advertisers and the ads they are running on Facebook. 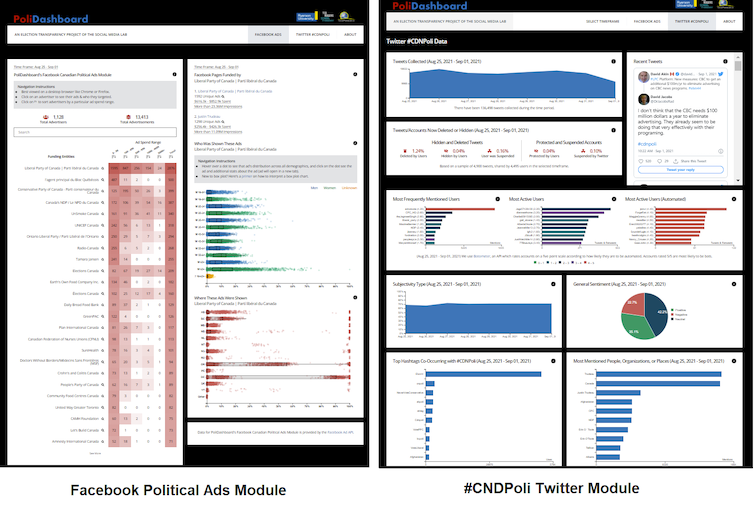 The Facebook Political Ads Module shows information about active and inactive ads involving social issues, elections or politics across Facebook products in Canada and is automatically updated every four hours via the Facebook Ad Library API. The module generates two interactive charts showing all of the ads the advertiser is running, who they are targeting and where in Canada the ad was shown.

PoliDashboard automatically aggregates political ads purchased by an advertiser, displaying how individual advertisers in Canada deploy their ad budget, where the ads are shown and who they are targeting with each ad.

According to our analysis of parties’ ad spending on Facebook during the first two weeks of the campaign (Aug. 15 to 28), the Liberals, the Conservatives and the NDP ran most of their ads in the four largest provinces: Ontario, Québec, British Columbia and Alberta, which is to be expected as these are also the most vote-rich provinces. Almost all of the Bloc Québécois’s ads ran in Québec.

Both the Liberals and the NDP largely targeted women Facebook users, while the Conservative Party’s most frequently targeted audience consisted of men. The Bloc mostly targeted men in the 45-64 age group and women 65 and older. These findings are in line with the new survey data from Nanos Research showing that Conservatives are surging with male voters and Liberals with female voters.

Facebook’s Political Ads by the different political parties between Aug. 15 and 28. The national Green Party did not run any ads on Facebook during this period. (PoliDashboard/Ryerson University Social Media Lab))

The most striking difference between the ad strategies of the different parties, however, was in the age group of targeted voters. The Liberals frequently targeted their ads towards seniors (especially people 65 and older). So did the Bloc, while the Conservatives aimed for middle-aged voters and the NDP went after younger voters.

However, without additional data about the targeting criteria used for these 46 ads, it is not possible for us to know why they were shown to underage users. It does not appear as though this underage group was specifically targeted by the party, since the same ads were shown to other age groups.

We are now aware of who parties are targeting with their ads. These glimpses into who is vying for voters’ attention on Facebook is a keen reminder of the fact that much of how Facebook functions is still a mystery to the public.

As more campaigns turn to social media to reach voters, the lack of transparency in digital political advertising and the role of algorithms in microtargeting raises many questions about accountability and transparency in our democratic processes.

At a minimum, transparency should include information about the criteria that political advertisers and Facebook use for targeting each ad. Without such information, it will be very difficult for political opponents, watchdog groups and election regulators to catch and flag falsehoods or engage in counterspeech. 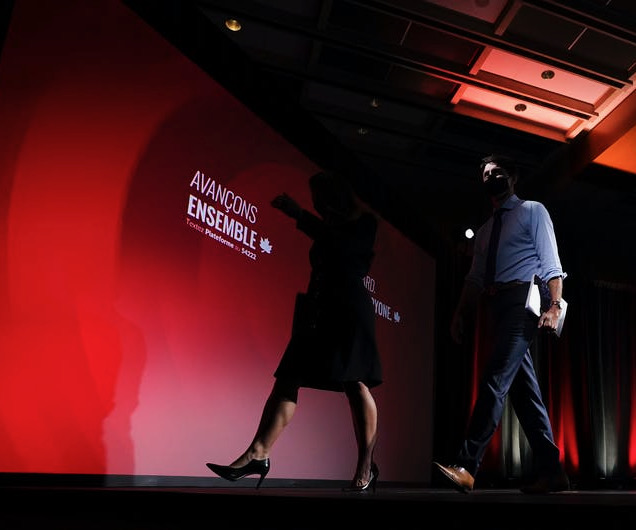