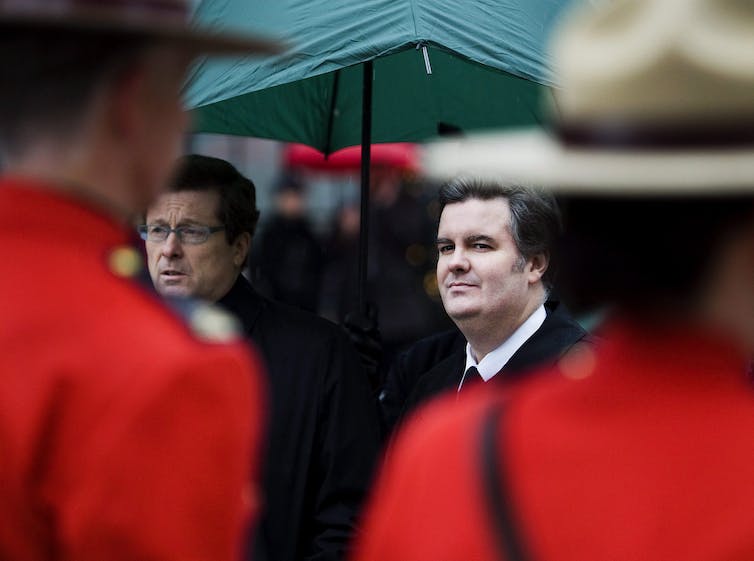 John Tory, left, then the leader of the Ontario Conservatives, and Edward Rogers arrive for the funeral of Ted Rogers at St. James Cathedral in Toronto in December 2008. The Rogers family feud in the years following Ted Rogers’ death is one of many to erupt at family-owned Canadian corporations. THE CANADIAN PRESS/Nathan Denette

In 1925, Vincent Massey, the scion of one of the wealthiest families in Canada, did something that Ed Rogers today would find unthinkable. 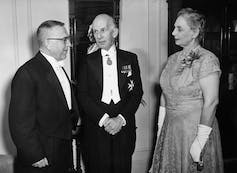 Gov.-Gen. Vincent Massey, who left his family business to later take on the role of the Queen’s representative in Canada, chats with D.B. Rogers (no relation to the Rogers family of telecommunications fame), president of the The Canadian Press, and his wife at CP annual dinner in 1956. (CP Photo)

Massey was the fourth-generation heir to his family’s Massey-Harris farm equipment company, then already well on its way to becoming Canada’s first truly global firm. Despite this, Massey decided that his future lay not in tractors but in public service and philanthropy. He later became governor general of Canada.

In realizing that his founding family needed to cut its ties with their namesake firm, Massey set an example that Rogers, heir to his own family’s giant corporation, might consider emulating.

Yet it’s clear that the Rogers scion has no intention of following in Massey’s wise footsteps — especially after a British Columbia court ruled he’s the legitimate chair of Rogers Communications Inc. It’s a major legal victory in his battle against his mother and sisters to take control of the family firm that’s drawn international comparisons to the HBO show Succession. 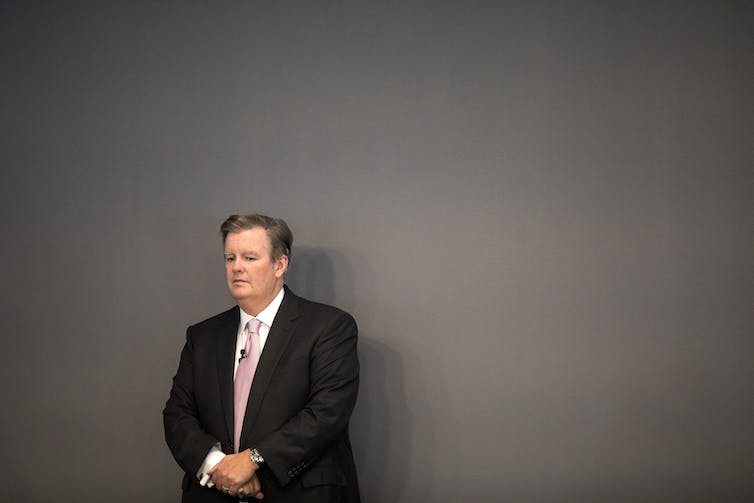 Instead, Rogers’ stubborn willingness to put his father’s company, its shareholders, its customers and its reputation at risk for a power play to assert control smacks of poor judgment and hubris.

He may have won the messy legal battle to control the company, but the comparison between Massey and Rogers reveals important lessons that can be learned about the pitfalls — and benefits — of family-run firms in Canada.

An abundance of corporate family feuds

Bitter family feuds and succession battles are not new to the Canadian business landscape. In fact, some of Canada’s most prominent family-owned firms have had very public brawls — a few of which even make the Rogers spat seem tame in comparison.

Most ended up in court, and often resulted in a family member being effectively bought out to go away — or ousted, in the case of Wallace McCain, over a succession battle — so that the family problems would no longer threaten the company itself. 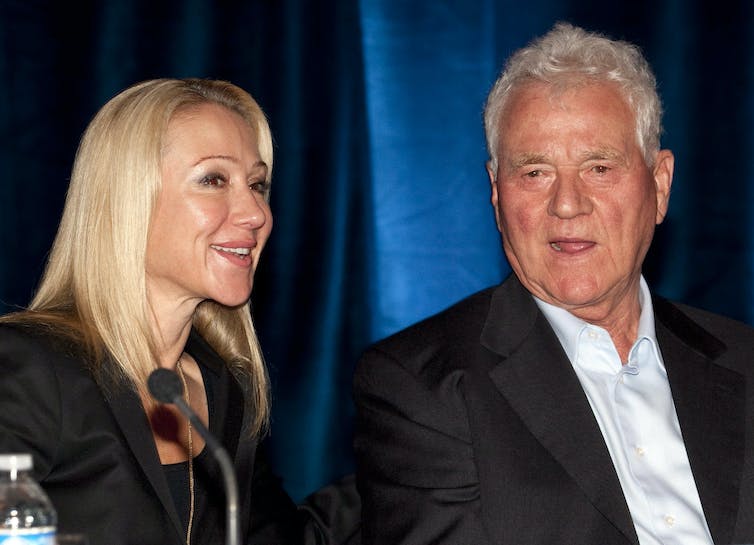 Magna International Inc. chairman Frank Stronach and his daughter Belinda, the company’s executive vice-chair, chat at the firm’s annual general meeting in 2010. The two later became embroiled in a family feud on how to manage the company that was resolved in 2020. THE CANADIAN PRESS/Frank Gunn

These historic fights, and Massey’s smart decision to step away, reveal the competing dynamics of family firms.

On the one hand, a closely held family firm keeps the business “in house” for generations, ensuring a steady hand, a stalwart vision and values beyond the bottom line. Wealthy families want to leave a legacy, which often results in generous philanthropy.

This was true of Massey-Harris (later Massey-Ferguson and still later, Varity Corp.) for at least three generations, as the firm was guided by its closely controlling patriarch, Hart, and then his sons, who gave most of their money away.

A smart family also knows when to make a dignified exit.

After Vincent Massey gave up control to professional managers and eventually relinquished ownership to financier E.P. Taylor (who developed the Toronto suburb of Don Mills and owned famed Canadian racehorse Northern Dancer), over the next half-century, Massey became an incredibly successful multinational.

Though it eventually collapsed in the 1980s, Massey’s failure had much less to do with the problems of family ownership than a rapidly changing tractor market, a 1970s recession and some poor management decisions. 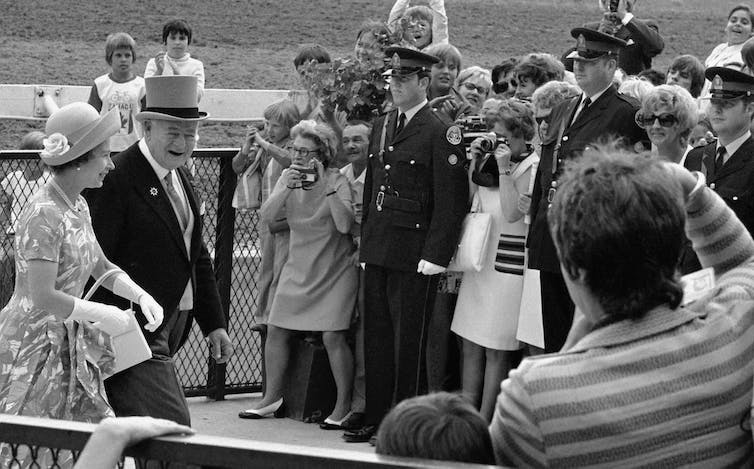 E.P. Taylor, president of the Ontario Jockey Club at the time, escorts Queen Elizabeth past crowds at Woodbine Racetrack in Toronto in 1973. (THE CANADIAN PRESS)

Yet these examples also show the problems of family-controlled firms — succession issues when there is no clear successor, boardroom fights when different family members have varying visions for the firm or a simple lack of managerial ability or judgment when it comes to an heir’s turn at the helm of the company.

At the same time, families that hold on too long or ignore outside advice until it’s too late — think the Eaton family, for example, which saw the department store chain’s storied history end in bankruptcy — illustrate how a family firm can fumble away a legacy that might have taken generations to build. 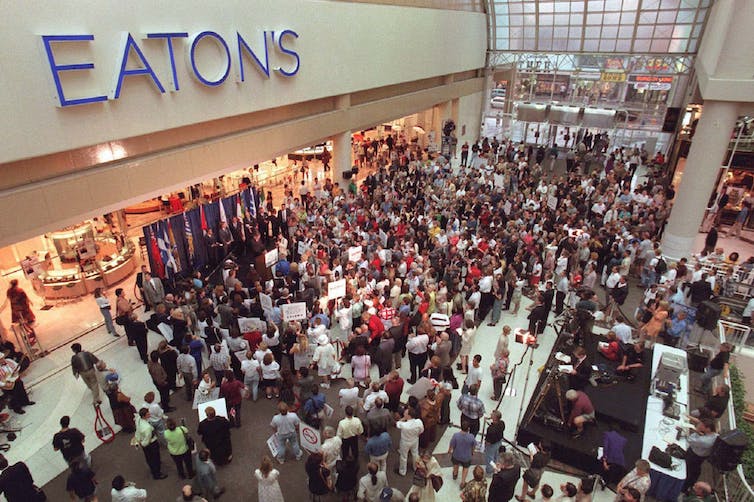 Eaton’s employees gather outside the company’s flagship store at the Eaton Centre in Toronto in 1997 after the company launched its restructuring plan in an ultimately unsuccessful effort to re-establish itself. THE CANADIAN PRESS/Kevin Frayer

When it comes to the Rogers brouhaha, most of the aforementioned Canadian family feuds occurred in an age before social media, when an ill-considered Instagram image can cause a public relations disaster — like, for example, when Ed Rogers and his wife, Suzanne, were photographed at Mar-a-Lago with the defeated and disgraced former president Donald Trump mid-pandemic.

Furthermore, most of the billionaire family feuds were also amicably settled, or at least the loser withdrew without further fallout for the company. The Rogers boardroom battle was resolved quickly, but the bad blood between Ed and his family will likely linger for generations to come.

The Rogers imbroglio also jeopardizes not only a $26 billion merger with Shaw Communications (another family-controlled, dual-share class telecommunications firm), but also threatens to sour an already tentative customer base — remember the 1990s negative billing scandal, when the company billed viewers automatically after giving them new channels for free for several weeks?

Rogers is not the most beloved firm in Canada, and the recent revelations about Ed Rogers’ interference in contract negotiations with Raptors’ president Masai Ujuri and his poor reputation among Toronto Blue Jays’ fans don’t help what are already horrible optics for the firm. Rogers Communications partially owns the Raptors and wholly owns the Jays. 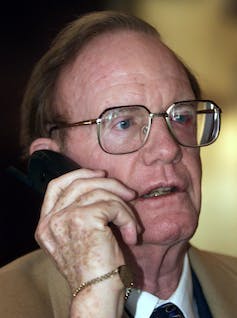 Ted Rogers uses his cell phone after a news conference in Montréal in 2000. (THE CANADIAN PRESS/Ryan Remiorz).

Taking your mother and sisters to court, after all, might not be seen as the most sensible approach to running a family business.

But at what cost to the company and its shareholders?

Ted Rogers himself famously once said “the best is yet to come” — but in the case of his son’s recent chess moves against his mother and siblings, that’s hardly set in stone for the company he founded. 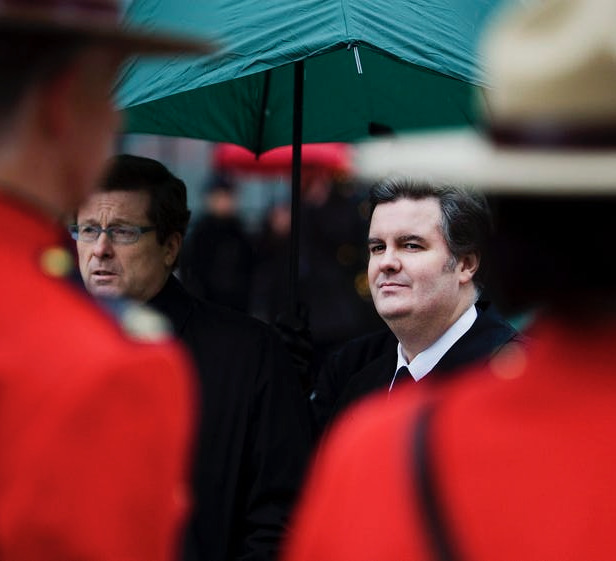