Conservation relies on cooperation among different interest groups and appropriate use of evidence to make decisions that benefit people and biodiversity. However, misplaced conservation occurs when cooperation and evidence are impeded by polarization and misinformation. This impedance influences actions that directly harm biodiversity, alienate partners and disrupt partnerships, waste resources, misinform the public, and (or) delegitimize evidence. As a result of these actions, misplaced conservation outcomes emerge, making it more difficult to have positive outcomes for biodiversity. Here we describe cases where a failed appreciation for cooperation, evidence, or both have eroded efforts to conserve biodiversity. Generally, these case studies illustrate that averting misplaced conservation requires greater adherence to processes that elevate the role of evidence in decision-making and that place collective, long-term benefits for biodiversity over the short-term gains of individuals or groups. Efforts to integrate human dimensions, cooperation, and evidence into conservation will increase the efficacy and success of efforts to conserve global biodiversity while benefiting humanity.

Recent social trends have seen rising polarization in political affiliations and on key issues (Bail et al. 2018), along with the amplification of misinterpreted or false information in public discourse (Lazer et al. 2018). These two trends may have negative effects on many aspects of health, politics, science, and the conservation of biodiversity. For example, as early as the 1940s, and for decades after, the spread of misinformation overwhelmed scientific evidence suggesting a link between tobacco smoking and cancer (Proctor 2012). Today, similar misinformation regarding the efficacy of vaccinations (Lazer et al. 2018) or responses to the public health orders (e.g., the use of masks to reduce the spread of COVID-19) foments polarization and threatens public health (Paes-Sousa et al. 2020). The mere suggestion of human-caused climate change has become polarizing, impeding actions that could minimize harm to human health, livelihoods, and biodiversity (Biddle and Leuschner 2015). Polarization threatens cooperative approaches to problem solving and decision-making (Barber and McCarty 2015; Maher et al. 2018), while misinterpreted or false information distracts the public and decision-makers from acting upon pressing needs and may waste resources in doing so (Oreskes and Conway 2011; Barnes et al. 2018). The conservation of biodiversity is a globally significant challenge, and inherently requires cooperation and evidence to be successful. However, success in conservation can be influenced by actions that undermine cooperation and evidence—i.e., polarization and misinformation. 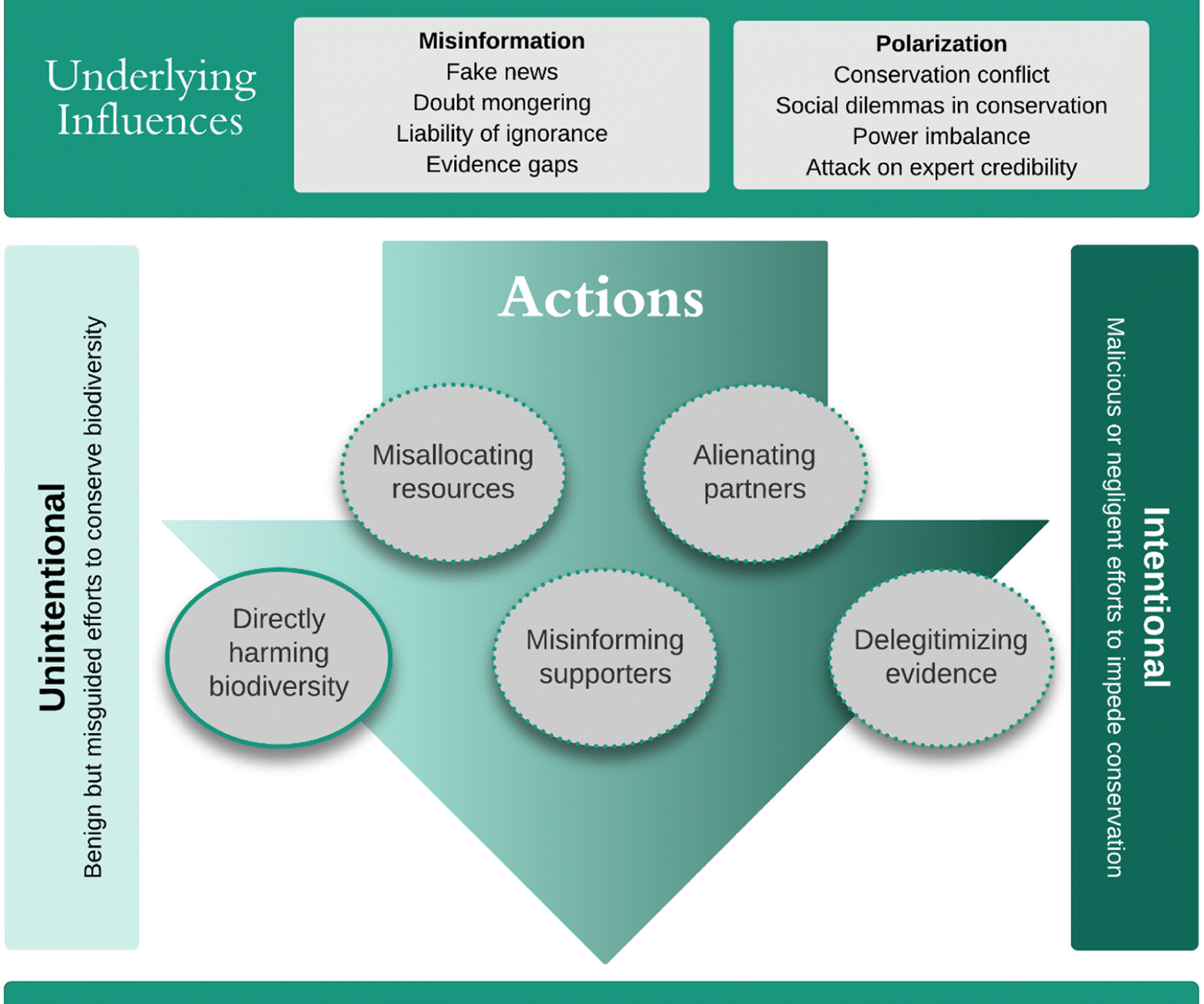