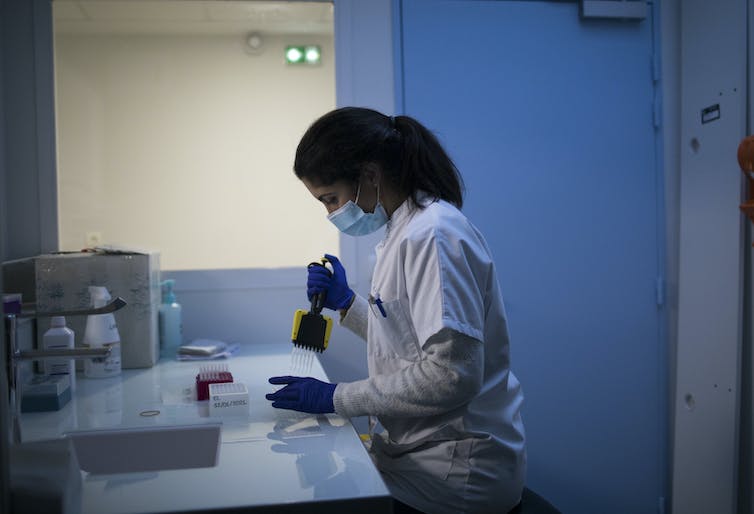 A new variant of coronavirus has swept across the United Kingdom and been detected in the United States, Canada and elsewhere. Scientists are concerned that these new strains may spread more easily.

As an evolutionary biologist, I study how mutation and selection combine to shape changes in populations over time. Never before have we had so much real-time data about evolution as we do with SARS-CoV-2: over 380,000 genomes were sequenced last year.

SARS-CoV-2 has been mutating as it spreads, generating slight differences in its genome. These mutations allow scientists to trace who is related to whom across the family tree of the virus.

Evolutionary biologists, including myself, have cautioned against over-interpreting the threat posed by mutations. Most mutations will not help the virus, just like randomly kicking a working machine is unlikely to make it better.

But every once in a while a mutation or suite of mutations gives the virus an advantage. The data are convincing that the mutations carried by the variant that first appeared in the U.K., known as B.1.1.7, make the virus more “fit.”

When a new variant becomes common, scientists determine the reason behind its spread. A virus carrying a particular mutation can rise in frequency by chance if it is:

The latter two examples are called “founder events”: a rapid rise in frequency can occur if a particular variant is introduced into a new group and starts a local epidemic. Chance events may explain the rise in frequency of several different SARS-CoV-2 variants.

But B.1.1.7 is an exception. It shows a very strong signal of selection. For the past two months, B.1.1.7 has risen in frequency faster than non-B.1.1.7 in virtually every week and health region in England. This data, reported on Dec. 21, 2020, helped convince U.K. Prime Minister Boris Johnson to place much of the country under lockdown and led to widespread travel bans from the U.K.

The rise of B.1.1.7 cannot be explained by a founder event in new regions, because COVID-19 was already circulating across the U.K. Founder events in a new segment of the population (e.g., following a conference) also aren’t plausible given the widespread restrictions against large gatherings at the time.

Our ability to track the evolution of SARS-CoV-2 is due to the massive effort by scientists to share and analyze data in real time. But the incredibly detailed knowledge we have about B.1.1.7 is also due to just plain dumb luck. One of its mutations altered a section of the genome used to test for COVID-19 in the U.K., allowing the picture of evolutionary spread to be drawn from more than 275,000 cases.

Epidemiologists have concluded that B.1.1.7 is more transmissible, but there are no signs that it is more deadly. Some researchers estimate that B.1.1.7 increases the number of new cases caused by an infected individual (called the reproductive number or Rt) by between 40 and 80 per cent; another preliminary study found that Rt increased by 50-74 per cent. 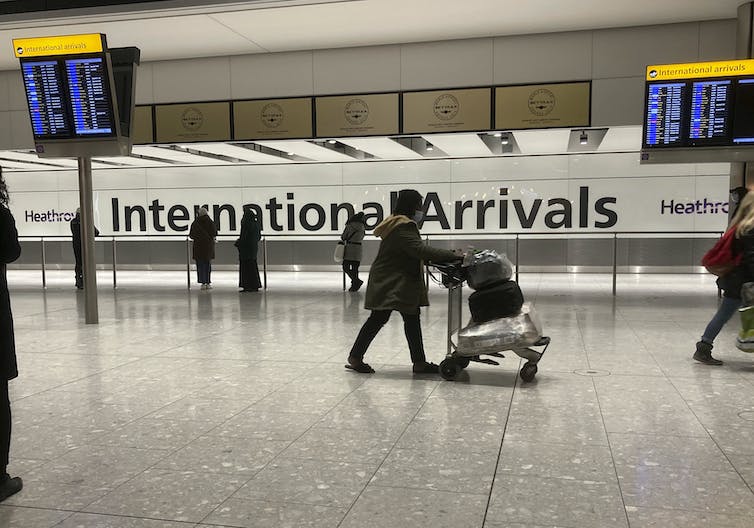 A woman pushes a luggage cart through Heathrow Airport in London, on Jan. 18, 2021. (AP Photo/Matt Dunham)

A 40-80 per cent advantage means that B.1.1.7 isn’t just a little more fit, it’s a lot more fit. Even when selection is this strong, evolution isn’t instantaneous. Our mathematical modelling, as well as that by others in Canada and the U.S., shows that it takes B.1.1.7 a couple of months to reach its meteoric rise, because only a small fraction of cases initially carries the new variant.

For many countries, like the U.S. and Canada, where the number of COVID-19 cases has been precariously rising, a variant that increases transmission by 40-80 per cent threatens to push us over the top. It could lead to exponential growth in cases and overwhelm already threadbare medical care. Evolutionary change takes a while, buying us maybe a few weeks to prepare.

One surprise for researchers was that B.1.1.7 bears a remarkable number of new mutations. B.1.1.7 has accumulated 30-35 changes over the past year. B.1.1.7 doesn’t mutate at a higher rate, but it appears to have undergone a bout of rapid change in the recent past. 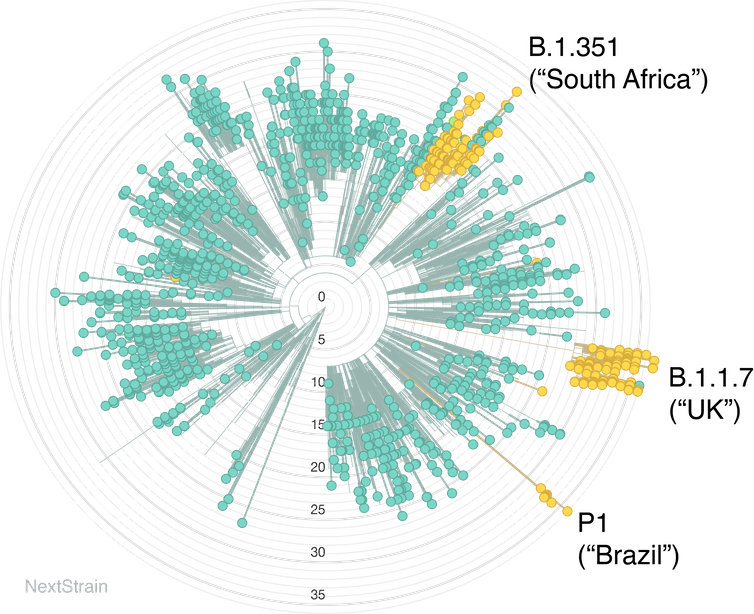 Each dot represents a SARS-CoV-2 genome, with branches connecting related viruses to their ancestors. The centre representss the virus introduced into humans. The viruses furthest from the centre carry more mutations. Highlighted in gold are the three new variants. (NextStrain), CC BY

The virus may have been carried by an immunocompromised individual. People with weaker immune systems fight the virus constantly, with prolonged infections, recurrent rounds of viral replication and only a partial immune response to which the virus is constantly evolving.

Preliminary research reports that have yet to be verified have described two other variants of concern: one originally from South Africa (B.1.351) and one from Brazil (P1). Both variants show a recent history of excess mutations and rapid increases in frequency within local populations. Scientists are currently gathering the data needed to confirm that selection for higher transmission, not chance, is responsible.

What changed to allow spread?

Selection plays two roles in the evolution of these variants. First consider the role within those individuals in which the large number of mutants arose. B.1.1.7’s 23 mutations and P1’s 21 mutations aren’t randomly arrayed across the genome but clustered in the gene encoding the spike protein.

Read more: New coronavirus variant: what is the spike protein and why are mutations on it important?

One change in the spike, called N501Y, arose independently in all three variants, as well as in immunocompromised patients studied in the U.S. and U.K. Other changes in the spike (e.g. E484K, del69-70) are seen in two of the three variants.

Beyond the spike, the three variants of concern share one additional mutation that deletes a small part of the drably named “non-structural protein 6” (NSP6). We don’t yet know what the deletion does, but in a related coronavirus NSP6 tricks a cellular defence system and may promote coronavirus infection. NSP6 also hijacks this system to help copy the viral genome. Either way, the deletion might alter the ability of the virus to take hold and replicate within our cells.

The parallel evolution of the same mutations in different countries and in different immunocompromised patients suggests that they convey a selective advantage to evade the immune systems of the individuals in which the mutations occurred. For N501Y, this has been backed up by experiments in mice.

But what accounts for the higher transmission rate from individual to individual? This is challenging to answer because the many mutations that arose at once are now bundled together in these variants, and it could be any one or a combination of them that leads to the transmission advantage.

That said, several of these variants have arisen before on their own and haven’t led to rapid spread. One study showed that N501Y had only a weak transmission advantage on its own, rising rapidly only when coupled with the suite of mutations observed in B.1.1.7.

While the evolutionary story of COVID is still being written, one important message is emerging now. The 40-80 per cent transmission advantage of B.1.1.7, and potentially the other variants B.1.351 and P1, will overwhelm many countries in the next few months.

We’re in a race against viral evolution. We must roll out vaccines as quickly as possible, stem the flow of variants by restricting interactions and travel, and get in front of spread by ramping up surveillance and contact tracing. 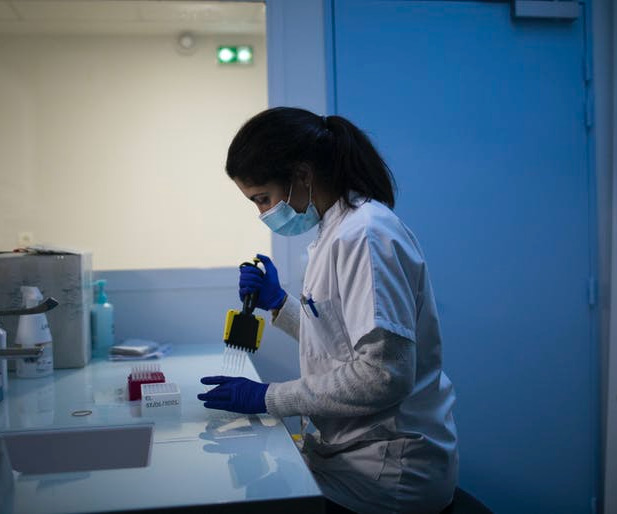