The development and exploitation of land by humans, now estimated to be 50% of the Earth’s terrestrial surface (Hooke et al. 2012), is widely recognized as the leading cause of worldwide declines in biodiversity (Maxwell et al. 2016; Johnson et al. 2017; Sanchez-Bayo and Wyckhuys 2019). One solution to mitigate these declines is the creation of protected areas. The International Union for Conservation of Nature (IUCN) defines protected areas as “a clearly defined geographical space, recognised, dedicated and managed, through legal or other effective means, to achieve the long-term conservation of nature with associated ecosystem services and cultural values” (Dudley 2008). In 1992, the United Nations set a worldwide goal of having 17% of all terrestrial land protected by 2020 (United Nations Convention on Biological Diversity 1992). In Canada, approximately 12.1% of terrestrial land and 13.8% of marine environments are currently covered by protected areas (Environment and Climate Change Canada 2019a). As of 2015, over 95% of these protected areas were under government jurisdiction and governance (Environment and Climate Change Canada 2016). However, the effectiveness of government protected areas for conserving biodiversity has been debated. One study found that, in 9 of 15 ecozones, randomly generated plots were over 4 times as likely to have more endangered species than government protected areas (Deguise and Kerr 2006). Conversely, a recent meta-analysis found that government-run marine protected areas had higher fish biomass compared with unprotected waters (Ban et al. 2014). Similarly, evidence suggests that government protected areas in Canada have higher species richness and species at risk richness than randomly selected parcels of similar-size land (Schuster et al. 2019).

In this study, we examined estimates of the number of native terrestrial vertebrate species (amphibians, birds, mammals, and reptiles) and species at risk (SAR) in protected areas created by Canadian governments and the Nature Conservancy of Canada (NCC) located in the southern half of Canada (Fig. 1). NCC is a not-for-profit organization founded in 1962 with the goal of “creating a legacy for future generations by conserving important natural areas and biological diversity across all regions of Canada” (Nature Conservancy of Canada 2020c). Over the course of its existence, NCC has contributed to the conservation of over 14 million ha of habitat (Nature Conservancy of Canada 2019c), has directly protected over 2 million ha of land (includes fee simple ownership, conservation agreements, land transferred to partners and resource rights directly secured by NCC), and currently has over 348 470 ha of land under their direct management (fee simple and conservation agreements). For over a decade, NCC has used a quantitative prioritization procedure to acquire protected areas (Arnold and Kraus 2009). While this procedure is not based on standardized species diversity data collected over a broad geographic area, their prioritization does attempt to target areas of high biodiversity for land securement. Thus, we hypothesized that NCC protected areas in Canada would have higher biodiversity estimates than randomly sampled pieces of land, but similar biodiversity compared with government protected areas. Following this hypothesis, we predicted that total native vertebrate species richness and SAR richness on NCC protected areas would be higher than or equal to that of government protected areas and would be higher than a random sample of land. 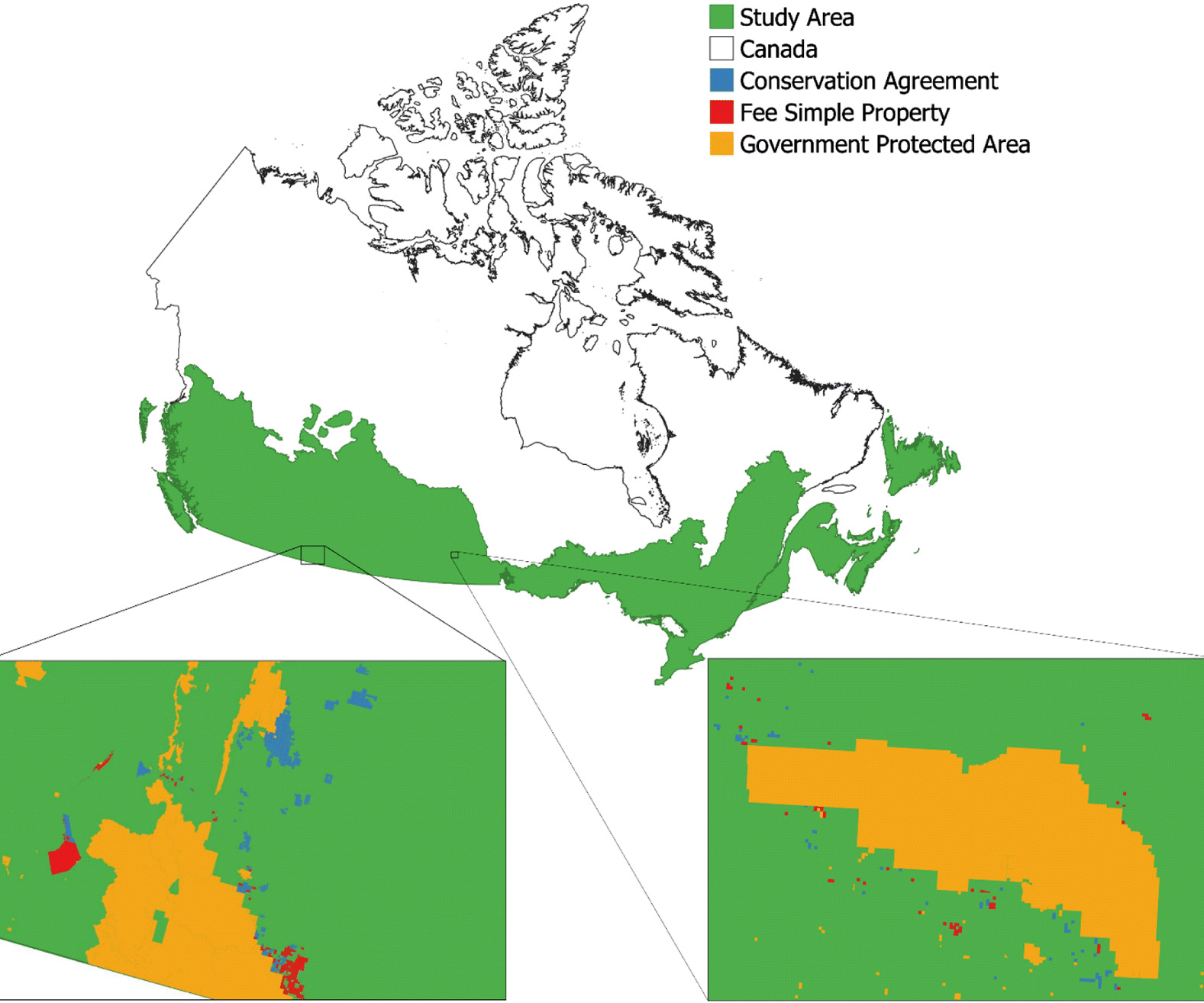