Home / Voices of the RSC / Truth before reconciliation: 8 ways to identify and confront Residential School denialism 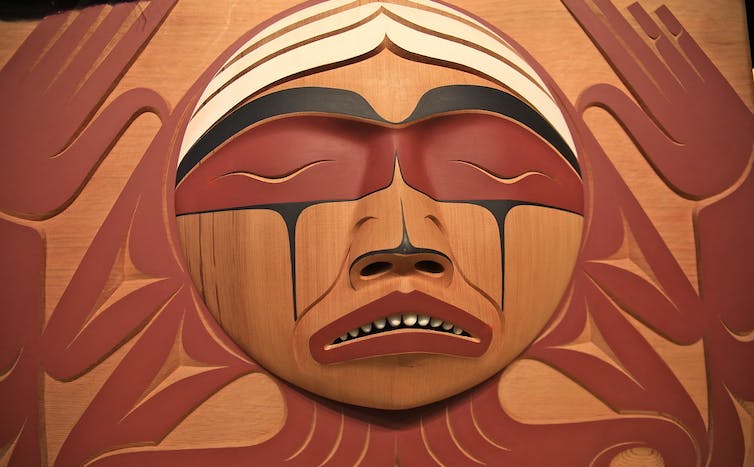 In its 2015 final report, the Truth and Reconciliation Commission was clear: “Without truth … there can be no genuine reconciliation.” The problem, the commissioners explained, is that “too many Canadians know little or nothing about the deep historical roots” of the ongoing issues stemming from settler colonialism generally and residential schooling specifically.

Embracing truth is all the more difficult for some because many Canadians still associate residential schooling with the positive images church and state officials used to propagandize and promote these institutions as humanitarian projects.

But lack of accurate historical knowledge is not the only barrier to truth and genuine reconciliation. There are a handful of figures — former senator Lynn Beyak, Conservative Party Leader Erin O’Toole, Conrad Black and others — who have openly engaged in denialism. 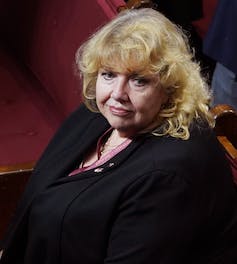 Lynn Beyak was suspended without pay in 2019 from the Senate after refusing to remove racist letters posted to her website about residential schools. THE CANADIAN PRESS/Chris Wattie

Residential school denialism is not the outright denial of the Indian Residential School (IRS) system’s existence, but rather the rejection or misrepresentation of basic facts about residential schooling to undermine truth and reconciliation efforts.

Residential school denialists employ an array of rhetorical arguments. The end game of denialism is to obscure truth about Canada’s IRS system in ways that ultimately protect the status quo as well as guilty parties.

Residential school denialists begin and end with a firm belief in innate Indigenous deficiency and settler innocence, often rooted in Christian triumphalism. Their ranks include missionary apologists, writers and academics, right-wing and anti-Indigenous editorialists and relatives of residential school staff who uncritically refer to personal memory and work to defend their family reputations. These are neither informed nor objective commentators.

Murray Sinclair, the TRC’s chair, has recently argued that residential school denialism is on the rise and real reconciliation is at risk.

Canada, Sinclair suggests, is rushing reconciliation and leaving the truth behind. In light of recent announcements of unmarked children’s graves across the country, now is the time to confront the truth about Canada’s IRS system and, in the process, disprove and discredit denialism. 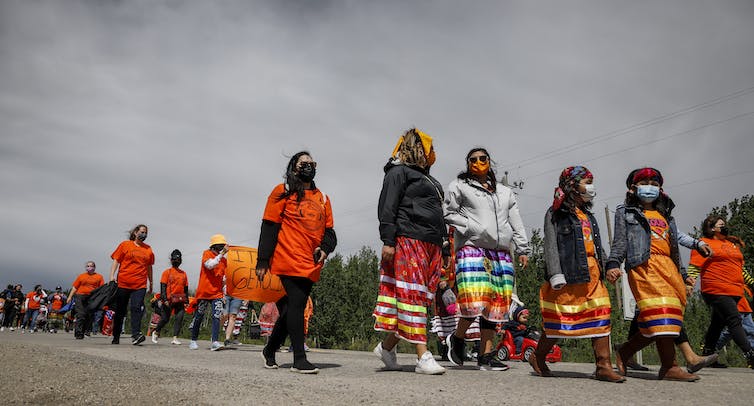 Members of the Tsuut'ina Nation take part in a silent march in Calgary in memory of the 215 unmarked graves found at Kamloops, B.C. THE CANADIAN PRESS/Jeff McIntosh

The following glossary is the start of an inventory of some common contortions used by denialists to try to undermine the overwhelming documentary and testimonial evidence of widespread, multigenerational, systemic and ongoing violence of the IRS system.

1. Genocide: The destruction, in whole or in part, of a nation or an ethnic group. In spite of the United Nation’s expansive official definition, denialists strategically narrow the term “genocide” to ethnic cleansing events modelled on the Holocaust. Contrary to historical evidence, denialists contend that genocide is not applicable to Canada.

The TRC’s final report shows how Canada’s treatment of Indigenous Peoples fits the definition of genocide, specifically explaining how the residential school system was a form of “cultural genocide.” Some denialists jump on this categorization to suggest that “cultural” genocide is not genocide. That is incorrect. The Canadian Historical Association has recently clarified that genocide is, in fact, the correct term to be using in the Canadian context.

Read more: Canada's hypocrisy: Recognizing genocide except its own against Indigenous peoples

2. School: A place where children are taught a variety of academic subjects. Physical assault, sorting of children according to racist assumptions and on the basis of ability and class have long histories in Canadian education. But the particular combination of factors distinguish residential schools from comparative schooling contexts. These factors include: racist assimilationism; cultural shaming and sexual violence combined with multi-generational collusion of church and state; the explicit aim of isolating children to neutralize community resistance to government control.

Denialists often make false comparisons between boarding schools and the violent carceral institutions known as “residential schools.” Canadian policy meant that for more than 100 years and multiple generations, Indigenous children were removed from their families and cultures to institutions where many were abused, malnourished, trafficked to local white families and inflicted with substandard education focused on manual labour and servitude — while government also systemically dispossessed Indigenous lands and resources.

Church and state officials often justify this “education” in humanitarian — even sacred — terms. But all of these “skills” directly supported the destruction of Indigenous ways of life and the ostensible training of children and youth for lower-class “productive” service positions. Indigenous children were not put on vocational or professional paths towards economic or social competition in Canada’s capitalist settler society.

4. “They had good intentions”: No matter how many bodies are found, how many people testify to the lifelong traumas of extensive abuse at the hands of church officials and teachers, denialists evoke the “good intentions” of some school officials as justification for their maintenance of a genocidal school system for over a century.

5. “You’re ignoring all the good things”: Anything at all that made life bearable under a dominant violent context of staff-inflicted cruelties, deprivations and separations from friends, family and home is cited by denialists as a “good” of residential schooling to absolve churches of culpability. Denialists insist on focusing on a minority of individualized, positive recollections from the schools as part of a strategy to discredit those who draw attention to the overall, systemic genocidal effects of the IRS system. Even the Anglican Church of Canada, which ran approximately 30 per cent of residential schools across the country, has clarified that “there was nothing good” about a school system that sought to “kill the Indian in the child.”

6. Balance: An equal weighting of different elements. Denialists often engage in a form of bias known as “false balance” to wrongly suggest that the “good” and the “bad” of residential schooling were equal parts of the “whole story.” The insistence on focusing on “positives” to provide “balance” fundamentally misrepresents the scholarly consensus, supported by overwhelming survivor testimony and backed by historical research, that the overall effects of the system are genocidal.

7. “It was of the times”: The idea that we can’t judge the past by the values of today. This notion wrongly suggests that no one judged the IRS system harshly during its operation. In fact, Indigenous parents, students and community leaders, church employees and even the Department of Indian Affairs’ own medical expert critiqued the system “in their own times.” However, powerful church and state officials chose to downplay and discredit dissent and resistance for over a century to protect the IRS system so that it could continue to support settler colonialism and Canadian nation-building — as a way of protecting their assets and defend against litigation.

8. Civility: What some settlers demand from Indigenous people when their denialism is publicly called out, challenged and discredited. Indigenous anger, sadness and refusal are labelled as uncivil and excluded from so-called mainstream dialogue. By contrast, our public institutions accommodate public settler anger and outrage used to defend denialists.

Overall, residential school denialism is a strategy used to manipulate and undermine the realities of Indigenous Peoples’ painful experiences under Canadian colonialism to protect the status quo. An honest accounting of the past makes possible an honourable future — but only if Canadians have the courage to face it. As the TRC reminds us, we must have truth before reconciliation — anything less will only perpetuate the harms of that history. 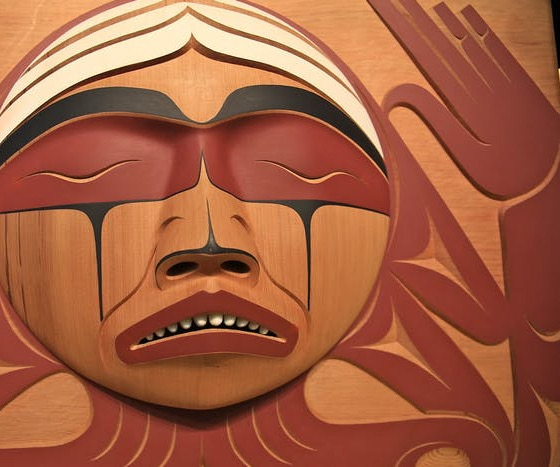