Home / Voices of the RSC / Saving millions of lives but some resources squandered: emerging lessons from health research system pandemic achievements and challenges

Stephen Hanney is emeritus professor at the Health Economics Research Group, Brunel University London, UK
Sharon Straus is a professor with the Department of Medicine at the University of Toronto
Bev Holmes is CEO of Michael Smith Health Research BC, British Columbia’s research support agency

During the SARS-CoV-2 pandemic, research averted millions of deaths worldwide through new vaccines, repurposed and new drugs, and non-pharmaceutical interventions. Simultaneously, there was unprecedented research waste: many trials were too small or poorly designed, various guidelines were duplicated, and sometimes scientific evidence was ignored in policy and practice.

Countries worldwide have a significant opportunity to learn from the pandemic to maximize benefits from investments in health research. To aid this learning, we used a World Health Organisation (WHO) health research system framework to analyse the research response to COVID-19 – including the production and synthesis of evidence and the use of local and global evidence in policy and practice – in seven countries.

The WHO framework identifies four functions of health research systems: governance, financing, capacity building, and producing and using research.  The framework enabled an analysis of the extent to which knowledge production and evidence use during the pandemic built on existing structures and capacity in national health research systems, and how these systems might have contributed to saving lives and limiting research waste.

We selected seven countries - Australia, Brazil, Canada, Germany, New Zealand, United Kingdom and the United States – based on major but diverse research contributions.  All are democracies; all featured in the top 20% of countries ranked on the 2019 Global Health Security (GHS) Index, which gave an indication of identified capacity to deal with a pandemic.  In October 2019, the US was ranked first out of 195 countries followed by the UK, and of our seven countries, New Zealand was in the lowest position, followed by Brazil. The countries had varying success in controlling the pandemic according to figures at the end of 2021:

•Vaccination rate: On the % of total population vaccinated, Canada was highest followed closely by Australia and New Zealand. The US had the lowest level followed by Brazil and the UK.

Of note, the above data do not reflect the heterogeneity of mortality rates within countries, which often correlated with social determinants of health including race, age and living situation. We relied primarily on leading scientific journals to gather information about how each health research system responded to the pandemic. The analysis covers 2020 and 2021, with emphasis on 2020 when the readiness of the system was especially relevant.

Effective priority-setting allowed rapid testing of new therapies, reduced resource waste, and enabled consideration of the needs of diverse communities. The UK is seen as having gone further compared with the other countries in identifying a small number of priorities, and was able to enforce them through the governance structures of the health research system embedded in the healthcare system.

The ability to accelerate ethics and protocol approvals and to enhance data access and sharing increased the speed and efficiency of research production. This acceleration was a feature of the development of vaccines and of the RECOVERY adaptive platform trial in the UK that identified dexamethasone as the first effective therapy against COVID-19.

Assessments of the benefits or impact of key COVID-19 research were rapidly conducted in Brazil, the UK and US showing millions of lives had been saved by the vaccines and repurposed drugs. The importance of demonstrating benefits from increased research expenditure was recognised, including through a comprehensive evaluation in New South Wales.

Financing: Unprecedented levels of funding helped, but there was waste and unevenness

During the pandemic the significant funding for research included public funding for many types of research, private funding for development of vaccines and therapies, and collaborative funding to help achieve major successes. In the latter category, accelerated vaccines depended on extensive funding, especially through the US’s Operation Warp Speed.

Many COVID-19 research funding calls were launched within different health research systems, although the increased funding was uneven, between countries and over time. Most countries’ major funding bodies launched rapid funding calls at the outset of the pandemic and continued to do so.  At various times, there was recognition of the importance of research programmes for specific purposes, including to support the needs of minority communities, especially Indigenous populations.

There was an associated risk that increased financing for research was accompanied by an increase in resources being wasted. This emphasises the inter-relationship between the components of health research systems, since where the coordination was strongest, there was less danger of duplication.

In all seven countries, existing research capacity made significant contributions to the production and use of a wide range of research.  Much of this capacity had been built over a long period, for example for drugs, including in the US and Canada, and in particular for vaccines with new platforms created through long-term biomedical research capacity in the UK, and for messenger ribonucleic acid (mRNA) vaccines in Canada, Germany and the US.  A noticeable feature of the COVID-19 research response was the wide range of disciplines that collaborated. Clinical research capacity integrated in healthcare systems was also critical, resulting in trial acceleration and waste avoidance, especially in the UK where the previous effort to embed research capacity in the healthcare system was favourably commented on during the pandemic by research leaders in other countries.

Producing and using research:  Accelerated research production and translation of research saved lives but there was considerable divergence in the use of evidence to inform practice and policies

An enormous amount of research was conducted on a wide range of COVID-19 topics including vaccines and therapies; there were hundreds of many highly-cited papers – which generally involved collaboration across institutions and even countries – that generated immediate and worldwide attention. Knowledge was rapidly produced, published and cited on sequencing and isolating the virus, and diagnosing it, for example the PCR test in Germany. This knowledge in turn led to further discoveries, publications and citations.  Accelerated research production and translation included animal trials of the Oxford vaccine, conducted in established publicly-funded facilities in Australia and the US. Trials in Brazil made key contributions to the Oxford vaccine and the pool of evidence used in both the UK-led living systematic review confirming corticosteroids were effective against COVID-19, and the Canadian-led WHO living guideline.

Evidence use for improving practice and policy also evolved quickly during the pandemic. Across the seven countries existing mechanisms and channels were leveraged quickly and effectively, and often extended. This was particularly noticeable in Australia, Canada, Germany and New Zealand: four of the countries with most success in limiting COVID-19 deaths, although Germany’s early success was not maintained. Effective efforts to promote and facilitate evidence use in policies, practice and communications can be linked to health research strategies, including an explicit mandate for evidence use; established cultures valuing health research; structures and mechanism for priority-setting and co-production, and strategic communications – the latter of which was particularly strong in New Zealand. While the UK (in particular), Brazil and US were able to build on their health research system structures and capacity to produce COVID-19 research and use it in product development, they were less successful in using research evidence in policymaking, which contributed to their higher COVID death rates. This highlights that success in knowledge production and product development does not automatically transfer into the use of evidence in policymaking. Even when the successful development of vaccines in the UK and US led to rapid implementation in those countries, by the end of 2021 they had fallen behind other countries where perhaps there was a stronger culture of using evidence and trust in effective communications.

Exploring seven countries’ efforts to produce, synthesise and facilitate the use of COVID-19 evidence enables the development of recommendations to maximize the impacts of health research. Recognizing that many factors were at play in the success of a pandemic response – location, healthcare access, racial and other inequalities, financial resources, the level of trust in the political leadership and more – research played a key role, and could play a stronger one in future.

Reflecting on the function of health research system governance, the need to improve coordination is clear, as are the importance of priority setting mechanisms – including those that enable broad stakeholder (including public) engagement – and rapid approvals of ethics, data access and sharing, and study protocols, in as coordinated a way as possible.  Another important area of health research system governance is evaluation including return on investment, given the unprecedented resources allocated for COVID-19 research and the importance of understanding impact.

Important contributions came from rapid mobilisation of existing primary and secondary research capacity, interdisciplinary cooperation and clinical research integrated in healthcare systems. Therefore, we recommend training and sustaining a wide a range of research capacity from basic science through clinical and health services research, and improving the integration of research directly into healthcare settings.

On knowledge production and product development, accelerated development of vaccines and other evidence greatly enhanced the pandemic response. We recommend continuing this acceleration, including the trend towards open access publishing. In the health research system function of using evidence, it is worth examining the extent to which policymaking was evidence-informed and served to limit deaths during the pandemic. In particular, it is critical to understand how policies addressed or as in many cases, likely exacerbated health disparities. An understanding of evidence use may enable researchers and policymakers to work more closely together in future – facilitated by appropriate mechanisms and structures – to more closely link evidence and policy and develop initiatives that will preferentially address health disparities. Focused attention to evidence-informed communication – accounting for current political realities, key stakeholder influence, and variations in audience understanding and preferences – is clearly warranted, and could help build trust.

Our analysis suggests two recommendations beyond those related to the WHO framework.  The first is to develop and implement comprehensive health research strategies (including prioritisation of health disparities), since it is clear that the avoidance of research waste during the pandemic depended to a considerable extent on such strategies, including those in the UK, New Zealand and in New South Wales, Australia. Given our finding that research production does not guarantee the use of evidence to inform policymaking – for example in countries where leaders ignored evidence – we recommend that development of health research strategies involves broad knowledge user engagement to maximize input and collaboration.

Our second further recommendation beyond the WHO framework is to increase efforts to analyse and address the downsides of the pandemic on health research: there is no doubt that health research systems will experience challenges due to non-COVID-19 research and to research careers – especially those of early career, minority and female researchers – having been put on hold.

We are hopeful that coming out of the pandemic, research stakeholders explore the important interactions among the components of their health research system, as well as the factors external to the system that are likely to affect its success, to maximize the benefits of health research for citizens.

This article initially appeared in the Globe and Mail on September 13, 2022. 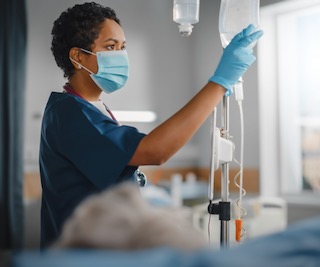