WHY THE DETECTION OF SARS-CoV-2 IN CANADIAN WILDLIFE MATTERS

Samira Mubareka is an infectious diseases physician and virologist at Sunnybrook Research Institute and University of Toronto.  She chairs the Royal Society of Canada’s Working Group on One Health

Claire Jardine is a veterinarian and zoonotic disease ecologist.  She is an Associate Professor at the University of Guelph and Regional Director for the Canadian Wildlife Health Cooperative, Ontario and Nunavut

Several infectious diseases in humans are caused by zoonotic viruses originating from other animal species. In some cases, spillback from humans to other animals may occur, and is the case with SARS-CoV-2, the virus that causes COVID-19.

The potential for transmission of SARS-CoV-2 from humans to other species became evident early in the pandemic both from experimental infections and reports of SARS-CoV-2 infections in zoo animals and pets.  What was less clear was the risk to wildlife in the broader, global battle against the virus.

In late November 2021, we detected SARS-CoV-2 in Canadian wildlife for the first time.  Several deer in the Estrie region of Québec provided evidence of both current and past SARS-CoV-2 infection.  Since then, deer in other provinces have also tested positive. This work was the result of a close collaborative effort between wildlife biologists, disease ecologists, virologists and animal and public health practitioners from provincial and federal government agencies and academic centres*, working together since 2020 to screen several different animal species for SARS-CoV-2.

The identification of SARS-CoV-2 in Canadian deer  was not entirely surprising, since there was evidence that deer from Ohio harboured SARS-CoV-2, with evidence of human-to-deer and deer-to-deer transmission.

What could this mean?

The possibility that a wild animal reservoir may become established loomed larger after reports of SARS-CoV-2 in farmed and wild mink in Europe.  An animal reservoir is a population of animals capable of harbouring pathogens such as a virus, where it could circulate and adapt within that species and transmit to others.  Spillback from mink to humans of a mink SARS-CoV-2 variant raised concerns, though fortunately this variant did not circulate widely.  Since then, outbreaks of SARS-CoV-2 among farmed mink have been described in other countries, including the United States and Canada.

The experience with SARS-CoV-2 in mink holds valuable lessons— it is clear that this virus can cause substantial respiratory disease and death in these animals, and that viral adaptations in mink can be transmitted back to humans.

For deer, there are many unknowns, including how SARS-CoV-2 spilled over from humans to deer.  Possibilities include direct contact with humans, or indirect exposure such as through contaminated wastewater; exposure through an intermediate host such as wild mink or cats is also possible, however, at this time there is no evidence to support any of these potential routes.

It does not appear that SARS-CoV-2 infection causes disease in deer. However, given the unpredictability of this virus, impacts on wildlife health remain an important concern. Understanding how deer and other species sharing the same habitat could be affected requires we go beyond just measuring the presence or absence of disease in wildlife.  We must consider potential impacts on biodiversity and food webs, and how these intersect with other threats such as climate change. Even without disease, persistence of viral activity among deer populations may have implications for other wildlife species, particularly those that may become sick, such as mink.  At this point, there is little, if any information on SARS-CoV-2 infection in animals such as caribou, muskox, and moose in Canada.  This becomes increasingly relevant as deer ranges change along with climate change and land use, leading to new human-wildlife and animal-animal interactions.

There are also implications for country foods, harvested from the land and the water.  For many Indigenous people, food like deer meat provide both sustenance and connections to the land.  The likelihood of transmission through consumption is quite low and handling guidelines have been developed to further reduce exposure when handling deer.  However, developing an in-depth understanding of risk and how to manage it should be an ongoing priority to maintain country food safety and security.

The evidence we have now from several species makes it imperative that we deepen our understanding of the fundamental viral biology and ecology of SARS-CoV-2 in wildlife.  Moving forward, it will be crucial to understand whether SARS-CoV-2 causes a transient and self-resolving infection versus a persistent, potentially low-grade one- or perhaps some combination of the two.  Determining transmission patterns and understanding the role of natural deer immunity are equally critical.

We must also understand the role of variants of concern (VOCs).  Certain mutations change which species are susceptible to a pathogen, that is, species which were not susceptible to certain strains of SARS-CoV-2 initially can become infected by a new VOC.  For example, the house mouse was not susceptible to the original SARS CoV-2 virus, but the Alpha VOC has mutations which allows the virus to infect this species (based on experimental data). How will the epidemiology and disease differ if/when Omicron spills over into deer?  The full implications of cryptic transmission in the wild remain unknown, but we cannot disregard the possibility that SARS-CoV-2 will adapt in deer, spillback into humans, and possibly impact control measures.  Critically, the risk VOCs pose to Canadian wildlife is relatively unknown at this time.

One Health recognizes that human health is connected to the health of other animals and the environment and stresses the need for a collaborative approach.   This requires that multiple disciplines and stakeholders work together to investigate challenges like SARS-CoV-2- from the molecular level to the level of populations.

At the molecular level, understanding the virology of SARS-CoV-2 can help determine which species are potential hosts. Animal species have different versions of key host cell factors, including the angiotensin converting enzyme 2 (ACE2) host cell receptor, which SARS-CoV-2 uses to bind to and enter host cells.  Knowing the genetic sequences of both viral and potential host genomes can provide some insight into which species may become infected.  These types of data can inform which experimental models to pursue and animals to screen in the field.

At the population level, we need to continue and expand active and coordinated surveillance for SARS-CoV-2 among Canadian wildlife.  This is a daunting challenge given the wide geographic range and diversity of animals to consider.  This is where a One Health approach proves highly valuable by focusing on areas where humans, other animal species, and SARS-CoV-2 may interconnect.  Some wild animals are considered peri-domestic, in other words, they share habitats with humans (like some racoons and mice) and may be at higher risk of exposure to SARS-CoV-2, particularly in areas where there have been high levels of SARS-CoV-2 activity among humans.

It is also important to conduct surveillance in animal populations bearing significance to Indigenous communities in Canada, given the potential impact of wildlife health on livelihoods and country foods.  Animals like caribou are also important from a conservation perspective.  These animals are threatened and at risk of extinction in Canada.  The risk of SARS-CoV-2 infection among caribou is likely lower than deer given their habitat and lower exposure to dense human populations with high rates of SARS-CoV-2. However, any health impacts on caribou herds would be so profound that they merit special attention and protection from the outset.

The involvement of traditional knowledge holders is essential when addressing these challenges to include conservation leadership rooted in Indigenous knowledge systems.  Protection of wildlife relies on thoughtful land stewardship, such as through the national Indigenous Guardians Programs and Indigenous protected and conserved areas (IPCAs), part of the Canada Target 1 Challenge to conserve at least 25% of Canada’s lands and oceans by 2025.  Also, there is an important role for on-the-land monitoring and educational programs.  While this may include direct observation of animal health and sampling, it also encompasses important observations around animal behaviour, including changes in geographic range which may result in unprecedented interactions between species.  This will be crucial in the coming years, not only for SARS-CoV-2, but other critical challenges like climate change and land degradation.

Now is the time to rapidly implement the Pan-Canadian Approach to Wildlife Health, a program to mitigate threats to wildlife, land, and public health by coordinating key activities  in preparedness, risk management, and health protection.    It is essential to act now, in anticipation of increasing human-animal interactions over summer and fall.

All these efforts will continue to rely on collective and sustained research and cooperation.  Contributions from diverse backgrounds, expertise, and perspectives will ensure the breadth of the approach and coordination will be key to ensuring these efforts are effective.  Encroachment on natural habitats, climate disruption, and other human activities contributing to the degradation of biodiversity and our biosphere are likely to lead to further pathogen emergence, emphasizing the pressing need for sustained collaboration.

SARS-CoV-2 has underscored the inseparable links between the natural world and humanity.  This virus is at the nexus of humans and wildlife, magnifying how interconnected we are.  Viruses will continue to present us with novel and unexpected challenges.  Health security at a global scale for all animals, including humans, and the land is the best shield we can mount.  The discovery of SARS-CoV-2 in deer calls into account our frayed relationship with the natural world.  We must now reconnect as caretakers, for the sake of our grandchildren and all future generations.

This article initially appeared in the Globe and Mail on February 1, 2022. 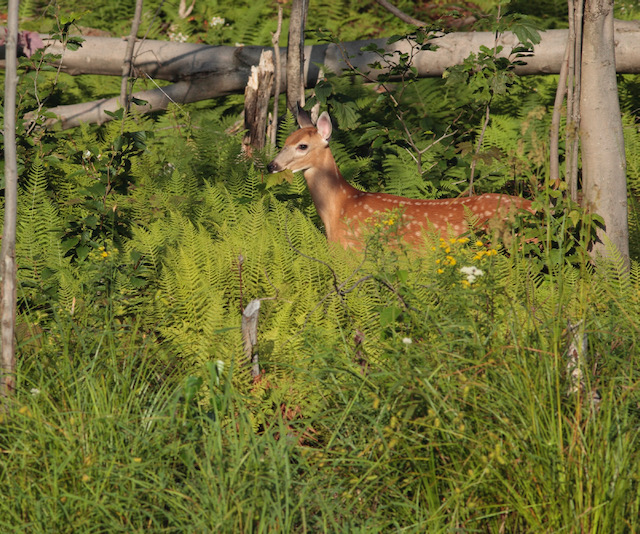