I am a geophysicist who uses seismicity from earthquakes induced in the laboratory or by human interaction with the earth, to image structures within rock. 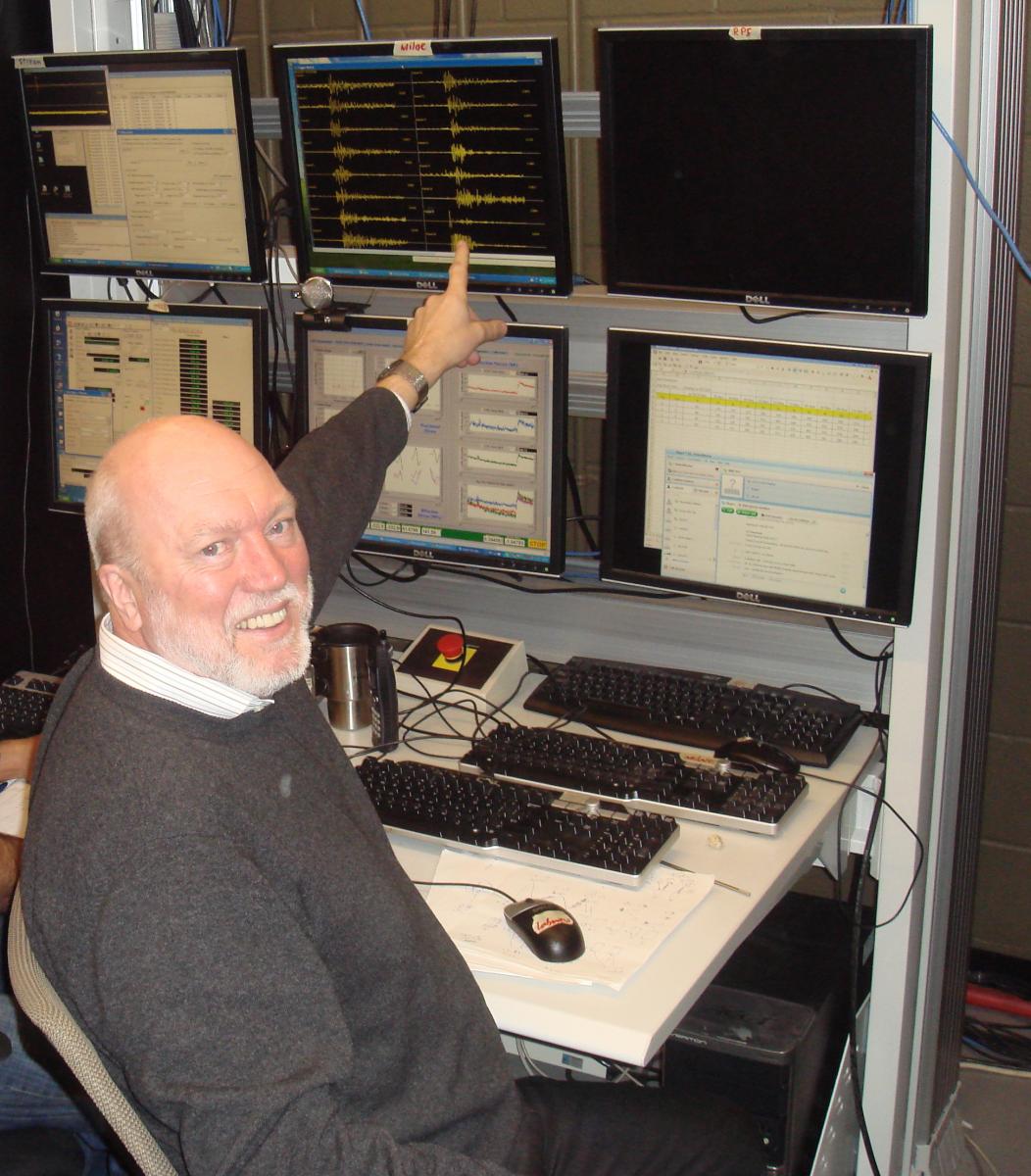 How does that work?

Our knowledge of the internal structure of the earth has been significantly enhanced by using earthquake seismicity. This is possible because many thousands of earthquakes that occur naturally around the earth are recorded on thousands of sensors all over the earth and these signals can then be used to create sub surface earth images. Have a look at this site from IRIS (a research consortium of seismology institutions) which shows global earthquakes that are continually mapping out major earth structures (http://ds.iris.edu/seismon/). We now know that the mechanisms of earthquakes are similar from the largest to the smallest and this has given us the ability to study some aspects of earthquakes in the laboratory.

Why study earthquakes in the laboratory when there are so many small natural earthquakes?

Good question, and the answer is because we can control some of the variables in the laboratory that we can’t do easily within the earth. Another reason is that my own research involves the investigation of earthquakes induced by human activity. Mining, injecting or extracting fluids from the earth are some of the actions that can induce earthquakes that might otherwise not occur. This human interaction with the earth can also be used to understand what is happening below the surface when other methods of access or observation are not available. So there are significant engineering applications of this technology, for example to monitor stability around underground tunnels or to provide an alert to increasing seismic activity associated with hydraulic fracturing, shale gas development or the disposal of waste water underground (https://cca-reports.ca/reports/environmental-impacts-of-shale-gas-extraction-in-canada/ ).

Why is that useful?

By using very sensitive seismometers it is possible to detect earthquakes that cannot be felt but contain information about the earthquake itself and the rock that the seismic waves traveled through to get to the seismometer. So, by using these numerous unfelt earthquakes it is possible to determine what happened to the rock at the earthquake site remotely. I spent the first 20 of the last 40 years working at a scale of earthquakes induced by mining and fluid injection/extraction in the field, and the last 20 years building and using a laboratory that allows myself and students  to study laboratory earthquakes under controlled conditions. These unfelt earthquakes are very useful as they provide the ability to see into what is opaque rock and determine how the human interaction processes are changing the rock properties and strength.  These processes, such as excavation or mining,  result in either new cracks/fractures forming which can weaken the rock and enhance pathways for fluids to move or make pre-existing fractures slip causing an induced earthquake. In the laboratory we have super sensitive seismometers and can control the stress, temperature and fluid pressure and create an environment that might lead to an induced earthquake.

What made you switch to the laboratory?

A combination of curiosity driven research and opportunity. In 2002, I became  the W.M. Keck Chair in Seismology and Rock Mechanics and also the Director of the Lassonde Institute at the University of Toronto: this provided the opportunity to take a new direction with my research. I was fortunate to then win major funding from the Canada Foundation for Innovation and the Ontario government to build a unique Rock Fracture Dynamics Laboratory. I have used this lab in the last 10 years to also study and simulate the conditions that are created for deep geological disposal of nuclear waste. I have worked at underground laboratories in Canada and Europe using these techniques to monitor how creating the underground openings for these repositories affect the structure of the host rock and how it changes the potential pathways for fluid transport. The aim of these underground repository sites is to develop containment facilities that seal the waste deep in the earth safely. My latest publication describes some of the work we have been doing using laboratory earthquakes in rocks from the Finnish repository site to understand how the stresses that are created from the openings underground are changing the strength, deformation and seismic properties of the rock (Open Access Link).

What else keeps you busy?

I have recently taken on the role of International (Foreign) Secretary of the Royal Society of Canada which serves the RSC to help address major global challenges collaboratively by mobilizing its multidisciplinary and multigenerational leadership with other National Academies to understand the current state of knowledge. I am very excited and honoured to be undertaking this role for the RSC during the next three years.